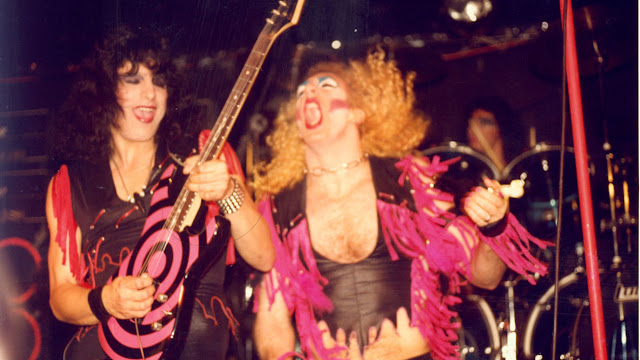 In 1982 Twisted Sister suddenly exploded onto the music scene after an electrifying performance on UK show The Tube and became an overnight success. This is the story of the thousands of gigs and decades of performance that went into that sudden fame. The tale of working shitty clubs and pubs, of building a wild and fanatical fan base, and working to create a unique image. It is a tale of shock and awe, of near riots, a run of cursed luck, and how you create a legendary outfit. This is We Are Twisted Fucking Sister.

Told through a series of interviews from various members, managers, publicists, fans, club owners, and record executives this is an exhaustive coverage of the early days of Twisted Sister. From their inception through to the ’82 appearance on UK TV we are given a frank and honest look into the band’s formation. All this is backed up by an array of photos, posters, and footage of the shows. It is a narrative that runs contrary to the “right place, right time” tale of rock success, and instead examines the work needed to create those opportunities. Ultimately it is one of those tales where truth is stranger than fiction, giving an insight to an age of rock ‘n’ roll that will never come again.

As you would expect when it comes to interviews, We Are Twisted Fucking Sister is the Dee and Jay Jay show. Both forces demonstrate the twin aspects of the band. Dee Snider is the wild showman, whose rage fueled the energy of the stage show. Jay Jay French represents an almost clinical professionalism, a constant striving to make it work financially. This dialectic is what drives the narrative of the band.

Perhaps suffering from an over-abundance of detail, We Are Twisted Fucking Sister feels a little long, and a lot like only the first half of the story. Still it is such a twisted tale that it leaves you craving more. Works for both hardcore fans of the band and novices alike

We Are Twisted Fucking Sister is worth a look, and is screening on the 13th and 20th as part of Revelation Film Festival’s This Is Rock season at Fringeworld. Click here for tickets.