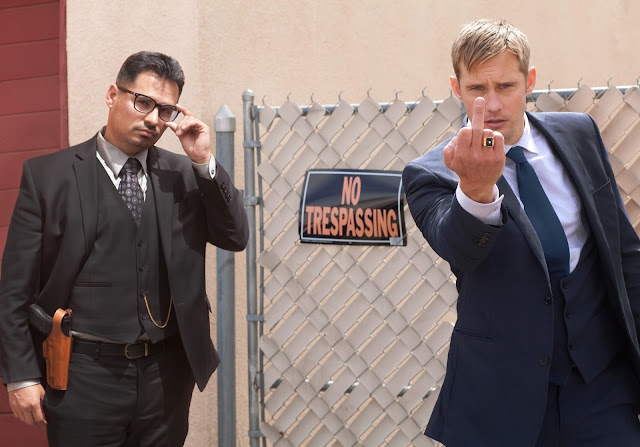 The title says it all – the latest offering from Irish director, John Michael McDonagh (The Guard, Calvary) delights in offending every possible subset of humanity in telling its tale of two corrupt and venal Albuquerque cops who bite off more than they can chew. And yet, below the gleeful nihilism lies a clear-eyed humanism that tempers the often brutally cynical goings-on with an honest but unsentimental love for its characters.

Bob (Michael Pena) and Terry (Alexander Skarsgard) use their positions on the force to line their own pockets, ripping off local crims and barely concealing their contempt for the whole artificial construct of the legal system when their harried captain (Paul Reiser) weakly tries to get them to toe the line. When they get wind of a botched racetrack robbery they see an opportunity to really make some money by leaning on one of the surviving thieves, but this brings them into the orbit of “Lord” James Mangan (Theo James): criminal mastermind, louche sybarite, and a truly dangerous and unpredictable opponent. Although still ostensibly acting in their own interests (there’s a lot of money in the offing), taking down the predatory Mangan might actually constitute an act of goodness – if the two can survive.

The obvious antecedent is Lethal Weapon, the prime ’80s buddy cop movie, even if it wasn’t, strictly speaking, McDonagh’s intention (he claims to have never watched it twice). Here, though, the upright family man (Bob) swears at his kids and breaks their toys when they bug him, while the cop on the edge (Terry) is an alcoholic abuse survivor who carries himself like a whipped dog (Skarsgard’s hunched posture speaks volumes). It’s little wonder that, when an abused kid is turned up in the course of their caper, they start thinking beyond their own atavistic desires.

Ultimately, War on Everyone becomes about family of choice, an idea often expressed by crime writer and lawyer Andrew Vachss. We see Terry struggle to build something meaningful with Tessa Thompson’s too-smart-for-all-this love interest, while Bob, his repeated labeling of his kids as “fat fucks” aside, is pretty much doing all this for his family (and the joys of railing coke with snitches and running down larcenous mimes). Like Bad Santa before it, War on Everyone deals in a kind of soulful misanthropy. Certainly, the surface details are entertaining enough, if you like your comedy black and caustic AF, but it’s what’s happening under the hood that makes this one a keeper.