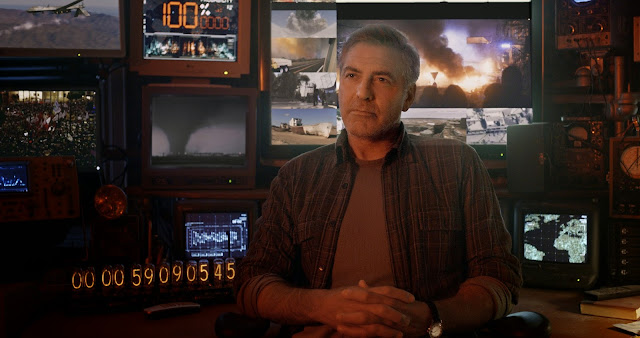 Directed by Brad Bird
Starring George Clooney, Britt Robertson, Hugh Laurie
Director Brad Bird’s rather troubling Objectivist leanings collide with co-writer Damon Lindelof’s ”mystery box” posturing in this unfortunate misfire from Disney, which manages to make all the wonder of jet-age speculative science seem as engrossing as a couple of hours in the dentist’ s chair.
It’s such a shame. Bird is a hugely talented filmmaker, and pretty much everything he’s ever put his hand to has been solid gold – think The Iron Giant, The Incredibles, Ratatouille, Mission Impossible: Ghost Protocol. That shame is only compounded by the secretive, slow-build marketing campaign leading up to the film’s release; prospective audiences have been conditioned to expect something awe-inspiring in Tomorrowland and, indeed, the film itself keeps nudging the viewer in the ribs, trying to get us to agree that what we’re seeing is cool, awesome, inspiring, uplifting. But it’s not: it’s all sizzle and no steak.
Britt Robertson makes for an amiable lead as Casey Newton, an inquisitive, feisty teen with a passion for science and discovery. Arrested after trying to sabotage the dismantling of a NASA launch pad, she finds a weird, metallic button among her personal effects when she makes bail; touching it gives her visions of a retro-futuristic, utopian city – the titular Tomorrowland. Teaming up with Athena (Raffey Cassidy), a mysterious young girl, and Frank (George Clooney), an embittered inventor, Casey sets out to solve the mystery of this sci-fi metropolis.
Okay, that’s the spoiler-free précis and, on a surface read, it’s pretty good. All the film’s problems lie in what we might term “spoiler territory” and the thing is that, with Disney’s close-to-the-vest marketing strategy, that’s most of the movie. It’s like an iceberg – 90% of it is under the surface. So, spoilers ahead, if that kind of thing matters to you.*
Tomorrowland the place is a kind of mashup between The Jetsons and Galt’s Gulch, a super-science citadel in a parallel dimension where the world’s brightest (or at least America’s brightest, for the most part – it’s a 1960s utopian vision, after all) could reach their fullest potential. Grumpy old Frank was a resident back in the day, recruited by Athena – who’s a robot – when he was a child prodigy. But Frank was ousted on pain of death when he invented something he shouldn’t have – which accounts for all the robot assassins that come after our heroic trio.
Co-writer Damon Lindelof makes a convenient scapegoat for the film’s shortcomings. All of his most irritating storytelling habits are on display here, chief among them a miserly approach to narrative information, which builds to an underwhelming climax when all finally revealed. The whole film is horribly structured and front-heavy – all that business with young Frank and Athena gets served to us in a long and awkward opening sequence – so that when we finally get to Tomorrowland, it feels like we get about 20 minutes to wrap up the story, with most of the answers info-dumped on us by either gruff good guy Clooney or supercilious supervillain Hugh Laurie, who plays Tomorrowland’s head honcho, Nix. Everything leading up to this is all first act stuff, stretched out over 100 minutes. It’s a snooze.
Tomorrowland wants to be an inspiring, uplifting film about the possibilities of science and discovery – what makes Casey, in Athena’s eyes, worthy of redeeming the city is quite literally her optimism – but it has a really uneasy relationship with technology and a pretty elitist attitude towards human potential. Bird has proved here that he’s not a guy who likes to share his toys, an attitude that was most foregrounded in The Incredibles until Tomorrowland came along. The film’s technocrats sequestered themselves permanently after Frank invented a machine that predicted that the end of the world was inevitable – not for a second is the notion raised that all the smartest people taking themselves off into perfect Randian isolation might have put a bit of spin on the outcome. The whole thing boils down to a kind of stern lecture on how we, as a culture, are too in love with dystopian fiction, and we’re racing towards the apocalypse because, deep down, we want it. We’d all be much better off if we embraced nice, progressive science fiction, like Tomorrowland.
The irony is that Tomorrowland is nowhere near as progressive a text as Mad Max: Fury Road, the latest incarnation of the ur-example of apocalypse cinema. Sure, it wears the trappings of golden age sci fi and even names most of its characters after noted genre authors – Keegan-Michael Key crops up as a geeky shopkeeper named Hugo Gernsback, a twofer if you’re familiar with early William Gibson. But it’s a hollow exercise in nostalgia that doesn’t even work as an example of mere spectacle. When Casey, Frank and Athena finally get to Tomorrowland, they find an empty, underpopulated shell of a place. That visual metaphor may not work the way Bird and co. intended it to, but it sure is apt.
TRAVIS JOHNSON
*It shouldn’t.