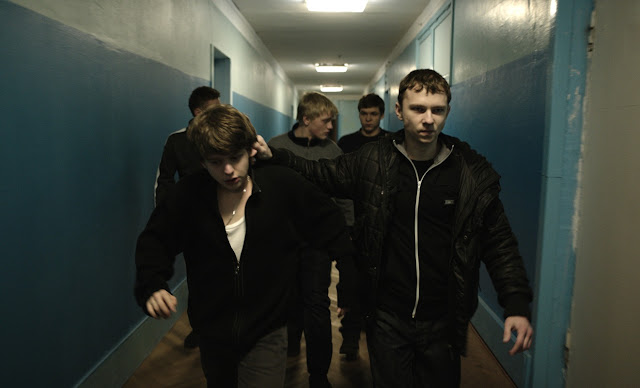 The IMBD synopsis for The Tribe is “A deaf teenager struggles to fit into the boarding school system,” which is a lot like the old chestnut about Moby Dick being a book about a whale: yeah, technically you’re right, but the trees are blocking your view of the forest. Like Melville’s novel, Ukrainian director Miroslav Slaboshpitsky’s film is dense, challenging, deeply allegorical and hugely entertaining.

It’s also one of the most literate films in living memory, incredibly adept in its deployment of cinematic technique and convention. The Tribe is built around two simple, unbreakable stylistic conceits. Firstly, each scene is shot in one long, seamless take; the camera glides through space but never blinks – we watch events unfold without edits or inserts telling us what is emotionally or narratively important. Secondly, there is no spoken dialogue in the film – at least not in the traditional sense. All speech is in Ukrainian sign language, presented without subtitles, voice over, or translation of any kind.

Which is not to say there is no communication; simply that we, as an audience, are denied our normal and most easily grasped vectors of information. We’re forced to pay attention, to glean our understanding of events and relationship dynamics from performance, from body language, action and context – in short, from what’s happening in the frame.

That shouldn’t really be a transgressive or challenging idea, but let’s face it: most movies are glorified radio plays and – action sequences aside – you don’t really need to use your eyes to follow the story. It’s discomfiting to contemplate that our dominant artform at this point in history seems to have, by and large, forgotten how to use its most powerful tools.

First time director Slaboshpitsky has not forgotten, though, and his choices make what could have been a fairly rote rise-and-fall crime drama resonate with rare power and insight. The broad strokes of the story are instantly familiar: plunged into the unfamiliar environment of a boarding school for deaf students, Serhiy (Grigoriy Fesenko) fights to carve out a niche for himself in a covert criminal enterprise built around theft and prostitution. At first proving himself adept at violence, he works as a low level enforcer and mugger before being promoted to pimp, escorting Anya (Yana Novikova) and Svetka (Rosa Babiy) to a local truckstop at the behest of teen gang lord, King (Oleksandr Osadchyi).

Serhiy’s rise through the ranks is unflinchingly brutal – those long,distant takes make the violence more impactful, not less- and so too is his fall, when his love for Anya puts him at odds with the gang’s plans to profitably ship both girls off to Italy. Still, even in a genre noted for its blase approach to bodily harm, The Tribe is a step above its peers in terms of its ability to unsettle.

All that viciousness is far from gratuitous, though. Slaboshpitsky draws into the inner lives of his characters even as he draws attention to the artificial nature  of the filmic narrative, repeating motifs and scenes in a way that, in a film free to obfuscate with dialogue and editing, may have passed, if not entirely unnoticed, then at least less obviously. The ultimate triumph of The Tribe is that it shows us what’s happening behind the curtain and yet still makes us care about the artificial shadows dancing across it, and that is nothing short of remarkable.