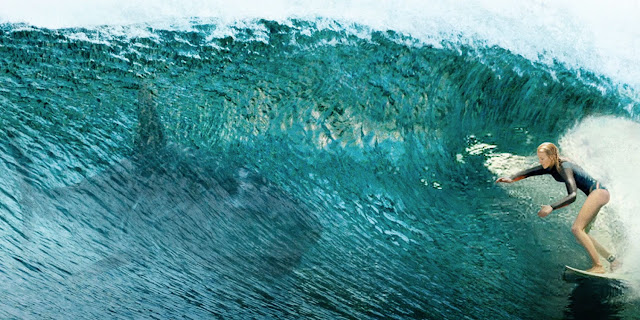 Directed by Jaume Collet-Serra
Starring Blake Lively
Following the death of her mother, surfer Nancy Adams (Blake Lively) takes a break from med school and heads south from her Texas home to an isolated bay in Mexico, once a special place for her mother, to surf, reflect, and think about what to do next. Her meditative sojourn is interrupted, however, by a hungry Great White shark, drawn into the bay by the presence of a dead Humpback whale. Wounded, frightened and trapped on an outcrop of rock some 200 metres from shore, Nancy has to figure out how to get back on dry land before the rising tide puts her at the mercy of the toothy predator.
Jaume Collet-Sera is a guy who specializes in making very smart, dumb films, approaching B-movie premises with a deeply clever understanding of genre conventions – both how to employ them and when to subvert them. Go look at Non-Stop or Orphan again if you don’t believe me. The Shallows is another in this line: a neat back-of-a-cocktail-napkin conceit rendered into solid, constantly engaging entertainment through sheer craft.
It’s a neatly constructed film, divided into little packets of time, each containing a problem for Lively’s level-headed Nancy to resolve. Can she staunch a bleeding leg wound? Can she retrieve a GoPro camera? Can she shield herself from the sun during the day? Can she swim to a nearby buoy without getting chomped? While there’s some “movie magic” logic going on at a few points, narratively the film is tight AF. The tempo of action is terrific, too, knowing exactly when to build suspense, when to release it, and when – and let’s face it, while we may moan, the technique can work – to deploy a good, old fashioned jump scare.
It’s a tight, sealed system of a film, and while scenarios like this invite “this is what I would have done” post-screening arguments, the script, by Anthony Jaswinski, lays out logical story reasons why Nancy is alone, why no one checks on her whereabouts, and why she has the skills necessary to aid her survival. It’s not Paddy Chayevsky, but it’s solid.
It’s also largely a one-hander. Other than Lively, almost everyone else in the film exists to either lend her some character (we briefly meet her father and sister in a bit of laudably economical backstory) or get eaten to prove that the shark is not fooling around (to be fair, there’s also a seagull who sticks around for a lot of the action). Lively is eminently watchable here (not something I think I’ve ever said about her before); her character is no shrieking, shrinking violet, but a capable woman who is dealing with a horrible situation as best she can. There’s no self-pity in her, and that makes her easy to barrack for.
She also looks good in a rashie and bikini bottoms, and the early stages of the film are very male-gazey, with Collet-Sera’s camera lingering on her curves as she lathers on the sunscreen and waxes her board. This fetishisation pf the body has a pay-off, though; once we’re trained by the camera to focus on Lively’s physical form, it’s then put through the ringer: shark bite, stinging coral, sunburn, gangrene, jellyfish, the lot. It’s a smart play, using the camera’s (and our) voyeurism to heighten the physical horror and drama.
Indeed, The Shallows is only dumb when it wants to be, and that’s largely when it comes to the behaviour of the resident poisson terrible, whose actions are about as believable as a bear driving a Studebaker; if nothing else, it’s hard to believe that any self-respecting predator would go to all that trouble to munch on one girl when there are literal tonnes of whale meat just floating there (and attracting no other scavengers). Knowing that doesn’t make the beast any less scary in the moment, though; the fear of being eaten is a primal one, and the shark is kept (mostly) hidden for a good long while, seen in glimpses or obscured by the environment. There’s a shot of it through a cresting wave that is one for the books.
The whole thing builds to a climax as tense as it is ludicrous, but thoroughly satisfying for all that. The Shallows is a great, self-contained B-movie survival horror that delivers on every promise it makes. Now that’s an endangered species.
TRAVIS JOHNSON