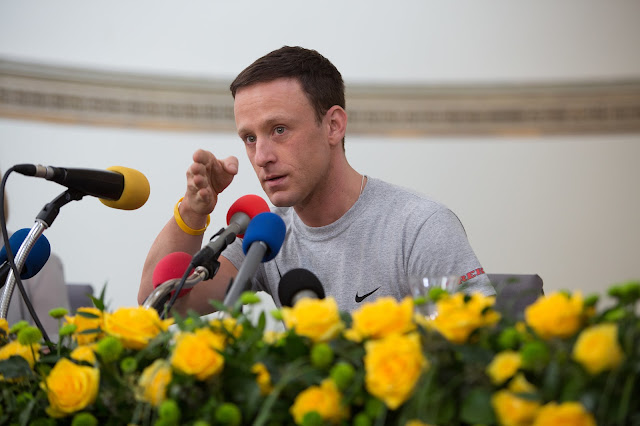 Ben Foster must be looking at an Oscar nomination for his performance here as disgraced cycling champion Lance Armstrong. He delivers a killer turn, letting us into Armstrong’s brutally ambitious mindset while at the same time managing to engender our sympathies. You might think that’s impossible given the sheer scale of Armstrong’s wrongdoing and the dizzying nature of his fall from grace, but it’s like Hitchcock said: when we see a crime committed, part of us becomes invested in seeing the criminal get away with it.

And it’s easy to understand Armstrong’s willingness to do whatever it takes to win: he’s a pro athlete, a fairly unforgiving field of endeavour. At the thin end of the wedge, where minuscule differences in performance can mean the difference between victory and ignominy and science beats the nebulous concept of “heart” hands down, the pressure to succeed is immense. That doesn’t make Armstrong’s actions forgivable – he pulls some real bastard moves here as the film progresses – but certainly relatable.

The Program forces us to switch points of identification a number of times. When we’re not in with Armstrong and the US Postal team as they dodge racing officials, smuggle substances, win races and generally run an incredibly complex and efficient drug smuggling ring, we’re following sports writer David Walsh (Chris O’Dowd), on whose book, Seven Deadly Sins, the film is based. It’s Walsh who finds Armstrong’s sudden meteoric rise from talented journeyman rider and cancer survivor to epochal game changer a bit too much to swallow, and he refuses to let the matter lie  no matter what the cost, personally or professionally. O’Dowd’s schlubby, everyman humanity is a boon here: her’es just a guy doing the job he ought to, not a wild-eyed crusader, although as things progress and he gets caught in the huge machinery of professional cycling, his grit is tested.

Essentially The Program is a long, drawn out duel between the two, with the shifting landscape of sports media the battlefield. The cycling world is ostensibly against doping, but it also needs a heroic figurehead like Armstrong, and while the film never flat-out states that the sport’s governing bodies were complicit in Armstrong’s cheating, the implication is there: perhaps they didn’t know, but perhaps they also went out of their way to ensure they didn’t know, if you follow.

Director Stephen Frears paces it like a thriller, but The Program is also one of the most blackly comic films of the year. There’s a theory that laughter is a reaction to being unable to hold two conflicting ideas in your head at the same time. Frears repeatedly juxtaposes the incredible lengths Armstrong goes to maintain his chemical regimen with scenes of him making inspirational speeches, television appearances, the media’s lavish adulation of the man, and your brain just fritzes. The scale of the lie is too vast. I was howling with laughter.

This is a slick, polished work that moves like, well, like Lance Armstrong used to back in the day. You don’t need to be a cycling fan for The Program to work for you – it’s got the goods.