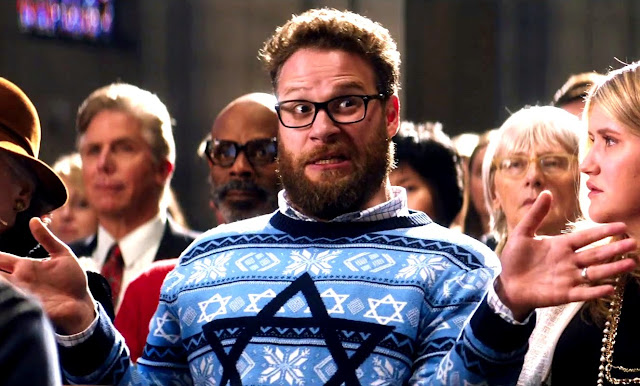 Directed by Jonathan Levine
Starring Joseph Gordon-Levitt, Seth Rogen, Anthony Mackie, Jillian Bell
Ever since a tragic car accident claimed Ethan’s (Joseph Gordon-Levitt) parents on the holidays, going out on Christmas Eve has become a yearly tradition for him and his best friends. Now years later, the tradition is threatened as all the friends are starting to drift away from each other. Isaac’s (Seth Rogen) first child is on the way, and Chris’ (Anthony Mackie) football career is taking off (thanks to a new diet and fitness regime consisting of steroids). Only Ethan is still excited about the annual get together. As the last night approaches, Ethan finds an invite to the Holy Grail of Christmas parties, The Nutcracker Ball, so the friends set off for one wild last night together. However, between an ex-girlfriend, a self proclaimed Grinch, a gift box of drugs, and celebrity dick pics, things are not exactly going to go as planned.
This should be a mess as the various story lines struggle for focus, eventually splitting the film as the three main characters go their separate ways, yet somehow it all comes together in a way that is rare for this type of film. This is a compliment to the comedic talent involved in this film, but in part it is because, despite the knob jokes, cocaine induced nose bleeds and casual sex in the club toilets, this is a film that has genuine sentimental affection for the holiday season.
The sloppy construction actually helps the sense of anarchic fun that pervades this film, as a bunch of friends celebrate what is to be their last Christmas night together before the pressures of life force them apart. The Night Before is energetic and has a lot of heart. It achieves that right balance, neither too sentimental or cynical. The film is stuffed to the gills with Christmas movie references –  from the compulsory It’s A Wonderful Life, to the less festive Die Hard ( it’s a staple for some of us, although your mileage may vary). A Night Before often threatens to fall apart, but is saved by the commitment of its cast, a couple of cameos, and a surprising amount of emotional resonance in the script.
The cast really seem to understand this film and give it their best. Isaac’s relationship with his wife is caring, with Jillian Bell is playing someone that is as far from the judgmental shrew archetype as you can get – honestly, it’s surprisingly refreshing to see, as they both seem to understand and work off each other, rather than appearing to be total strangers forced together that are constantly shocked by the other’s actions. Ethan’s obsession with his friends is a great arc that clearly demonstrates the “family you choose” aspect of friendship that has become so prominent in the modern world. Ilana Glazer (Broad City)just kills it as Grinch, a character that identifies with all the negative aspects of the holiday. However, the crowning angel on top of the Christmas tree is Michael Shannon as a drug dealer that acts as the ghosts of Christmas past, future and present. His matter-of-fact holiday Zen grounds the crazy antics happening around them.
It’s not a film that will appeal to everyone, and its sentimental call to holiday specials probably plays a little stronger to traditions in The States than it does here, but with some screamingly funny jokes and a solid core of sentiment The Night Before does offer some holiday cheer.
DAVID O’CONNELL