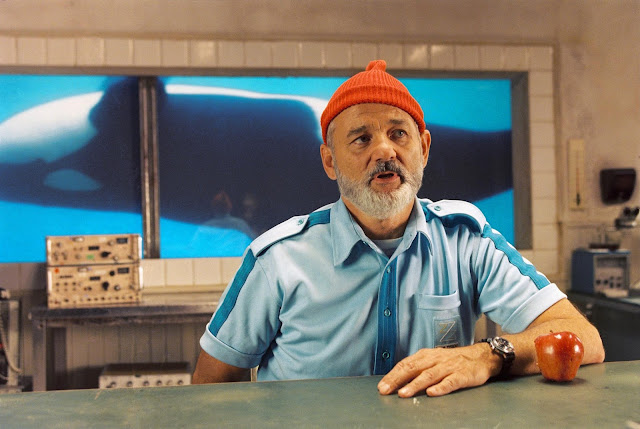 It’s my birthday today. I’m 39. Naturally, my thoughts turn to matters of ageing, and my favourite movie on the topic is Wes Anderson’s sublime meditation on success, failure, acceptance and second acts, The Life Aquatic With Steve Zissou.

Steve Zissou (the sublime Bill Murray) is a washed up oceanographer, a kind of low-rent Jacques Cousteau whose meagre fame – earned via a series of documentary films and tie-in ventures – is waning. Following the death of his best friend, Esteban (Seymour Cassell) on his last expedition, and the failure of the subsequent film, Zissou determines to undertake one last voyage to find and kill the “Jaguar Shark” that ate his buddy. The purpose? “Revenge,” he deadpans.

Anderson has always set his films in carefully constructed worlds, highlighting the artificiality of his medium while at the same time drawing us into his handmade universes with his exquisite eye of detail. His films practically have a proscenium arch, and The Life Aquatic is no different. Although on first taste it’s a far cry from Anderson’s usual tales of hothouse flowers in familial strife, the nautical setting is a good fit for his narrative concerns; once again we’re thrust into a self-contained world with its own idiosyncrasies and traditions, its own complex social structures and relationships, it’s own population of eccentrics. Life at sea has a particular jargon and set of customs that are already pretty opaque for landlubbers, and Anderson has a lot of fun inventing his own esoteric bits of business, from Zissou’s attack of “crazy eye” to the myriad species of sea life encountered through the journey, all lovingly brought to life by animator Henry Selick.

Still, as inviting and aesthetically satisfying as this world of blue speedos and research turtles is, it’s the characters who inject life into the proceedings, This, more than any preceding film, sees the firming up of the Anderson Repertory Company, with frequent collaborators Anjelica Huston (Zissou’s ex-wife, Eleanor), Owen Wilson (Ned Plimpton/Kingsley Zissou  – Steve’s son* by an old fling), and Willem Dafoe (Klaus, Zissou’s insecure right hand man) all putting in fantastic work. Plus we get the added value of Cate Blanchett as Jane, the reporter sent to cover Zissou’s mission; Bud Cort as Bill, the bond company stooge Team Zissou have foisted upon them by their unsympathetic insurers; and, gloriously, Jeff Goldblum as Hennessy, Zissou’s more successful professional rival, who stole Eleanor away from him (she subsequently divorced Hennessy, too. At one point, Hennessy laments, “We’ve never been very good husbands, have we?).

The heart of the film, of course, is Zissou himself. Anderson wrote the role especially for Murray, and it’s exceedingly difficult to imagine anyone else filling the complicated captain’s wetsuit. Zissou is a complex figure, arrogant but fearful, intelligent but narrow-minded, physically courageous but emotionally stunted, scientifically inquisitive but unable to communicate with other humans in a meaningful way.

What he isn’t, though, is shallow. Zissou may not be aware of his exact shortcomings, but he is aware that he has shortcomings – he sees it in the reactions of those around him, and it troubles him. He knows he’s great but… what if he’s not as great as he knows he is?

This ties in with the film’s broader mistrust of the blunt signifiers of masculinity. Superficially, Team Zissou are all seasoned professionals, ready to hurl themselves into an ocean full of teeth at a moment’s notice, but Anderson gently undercuts this bluff bravery at every turn – most notably in the character of Klaus, whose stiff German accent hides a terrible need for approval from Zissou. Zissou, for his part, is the ultimate absentee father: distant, obsessed with his work and his legacy, sparing with his praise and scathing when he is disappointed. Of course, this all stems from his own issues with masculinity; in one of the film’s most crucial scenes he confides to Ned/Kingsley, “…I hate fathers and I never wanted to be one.”

Of course, Zissou is a father – a father to his men, and even his supposed enemies, like Hennessy and Bob. Zissou’s journey is coming to understand accept that it’s possible to be a flawed father, a clay-footed king – a lesson that he learns in his final, emotionally wrenching encounter with the Jaguar Shark, his team behind him, comforting him. The shark is the ultimate rebuttal of the carefully constructed illusions of masculinity, a completely indifferent force of nature. It killed Esteban and doesn’t even remember it; “Do you think he remembers me?” Zissou asks, before finally succumbing to tears. It’s an incredible moment.

The Life Aquatic With Steve Zissou is Wes Anderson’s worst-reviewed film – only 56% on Rotten Tomatoes, if you care to check. It’s also his best: a warm, droll, incredibly humane and moving exercise wherein Anderson’s love of artifice and his emotional concerns work together in perfect unison. All else aside, there’s a scene where Bill Murray has a shoot out with Filipino pirates set to Iggy Pop’s Search And Destroy, and the film ends with a tribute to Buckaroo Banzai. If that doesn’t do it for you, I don’t think I can help you.