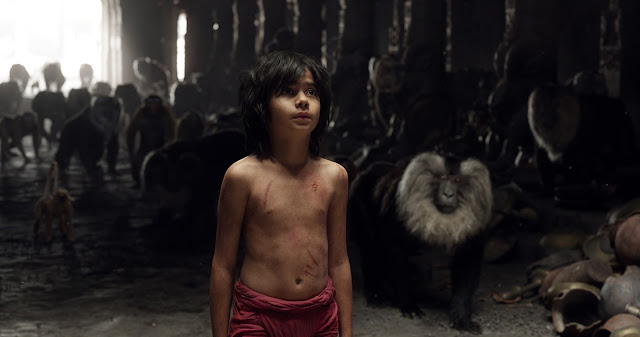 The latest in Disney’s program to reboot their beloved animated properties as live action blockbusters comes roaring into theatres this week and it’s… okay, I guess? It sure is pretty, that’s inarguable; its photorealistic CGI talking animals and richly detailed digital backlot sets are utterly gorgeous. As for plot and theme and character… well, that’s a whole other thing.

Based on the 1967 Disney animated musical, which in turn was based on the Mowgli stories from Rudyard Kipling’s The Jungle Book, the film follows the exploits of Mowgli (Neel Sethi) an orphaned “man cub” who is found in the jungle by the black panther Bagheera (Ben Kingsley) and subsequently fostered by a wolf pack led by Akela (Giancarlo Esposito) and Raksha (Lupita Nyong’o), who become the foundling’s de facto parents.

Trouble comes a-calling in the form the of the evil tiger Shere Khan (Idris Elba, who is pretty great, but he’s no George Sanders), who wants to eat the kid. Bagheera resolves to return Mowgli to the nearby human village where he can be raised by his own kind, but Mowgli wants to stay in the jungle, and so begins a loosely linked series of skits where Mowgli adventures among different “peoples” of the jungle, trying to see where he’ll fit in. Meanwhile, Khan lurks in the background, an ever-present if somewhat inactive threat.

While the good folks at Mouse HQ certainly knew they wanted to make a live action Jungle Book, it is readily apparent that no one involved knew exactly what kind of Jungle Book they wanted to make. This really feels like a film by committee, even more so than your standard tentpole picture. The tone veers all over the place, from the somewhat self-serious tone of the opening act, which apes the feel of reading Kipling’s original work, to the cartoonish one liners and song and dance numbers that populate the middle third. Individual moments are fun – it’s hard to diss a version of Baloo the bear that’s voiced by Bill Murray – but they don’t hang together. It’s easy to picture director Jon Favreau (Iron Man, other stuff people liked less than Iron Man) and screenwriter Justin Marks working off a studio-mandated checklist: The Bare Necessities, check; the bit with the snake, check; something to do with fire, check…

The songs – and don’t get me wrong, I love the songs in their original context – feel really out of place here, set against the lovingly-rendered jungle setting, and coming from the mouths of completely convincing animals. That the animals speak is a conceit pretty central to The Jungle Book; that they sing Disney showtunes is, in this instance, a bridge too far. When we meet King Louie (Christopher Walken), the hulking orangutan who rules the bandar-log monkeys, he’s initially presented as a figure of deep menace, with Favreau going so far as to throw in a visual nod to Marlon Brando in Apocalypse Now – but then he’s singing. I am not one to look a gift singing-Walken-voiced-primate in the mouth, but it certainly goes a long way to undercutting the scene’s tension.

All this could have been avoided if someone – anyone – had been able to say, at any given point in the production schedule, what The Jungle Book, this particular Jungle Book, is about. I mean beyond the kid-grows-up-in-the-jungle surface stuff. Kipling was, in his writing, first and foremost a didact, and so many of his works are fables intended to impart a lesson – The Just So Stories explicitly. The structure of the actual written Jungle Book precludes a strictly faithful adaptation, but it is baffling to me that Favreau and co. could not, as the 1967 Disney team did, take the iconography from the Mowgli stories and put them to their own purposes, weaving them into a solid, thematically consistent structure.

The film as it stands sets up themes and then contradicts them over and over again. Mowgli is shown to be a vulnerable figure in the primeval forest, but comes into his own when he uses his ingenuity to make simple devices and machines to help him work. His strength is his intellect, but this is proven to be dangerous to the other jungle people. there’s a shot of Bagheera framed on either side by Mowgli’s inventions in such a way as to look like he’s caged. It’s a beautiful, resonant shot that speaks to an intent, at some point, to dig into something deeper – but it’s forgotten in the drive toward a big climax and a happy ending. Without drifting into spoiler territory, the fact that the climax is supplied courtesy of the very things the narrative has told us are bad up to that point is a massive problem

I have no idea what lesson Mowgli learns along the way here- he’s so lacking in agency that he is, despite how charming young Sethi is, barely a character.  I have no idea what an audience is supposed to take away from The Jungle Book apart from a couple of earworms and the certain knowledge that a couple of thousand rendering farm inmates certainly earned their keep on this one. The film is a beautiful mess, and though I daresay almost any given viewer will find something to enjoy, it’s far from the modern classic Disney clearly want it to be.