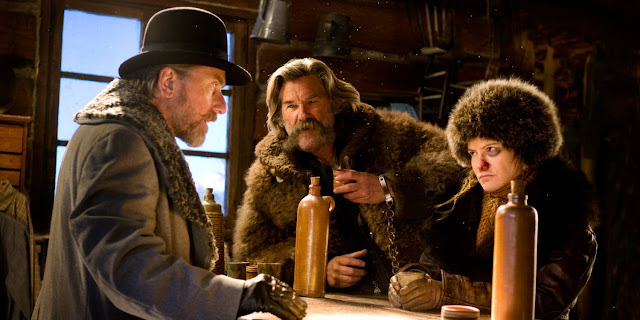 It’s right there in the title: The Hateful Eight is about awful people doing awful things to each other, for a variety of reasons: cultural, historical, personal. It’s a film filled with familiar faces, brilliant dialogue and on-point performances, and you will find yourself drawn to one character or another for whatever reason, but make no mistake: there are no heroes here, and anyone you mistake for one is going to let you down in the most brutal and bloody way.

Set an ambiguous few years after the American Civil War, The Hateful Eight is basically a chamber piece that puts a group of disparate desperadoes in an isolated outpost cut off from the rest of the world and lets them bounce off each other in entertaining and violent ways. Minnie’s Haberdashery is the location, a way station high up in the mountains of Wyoming. A killer blizzard is the agent that keeps the cast of characters in close and dangerous proximity. And the cast of characters? A never better roster of frequent flyers from the Quentin Tarantino Stock Company.

Kurt Russell is bounty hunter John “The Hangman” Ruth, who always brings his quarry in to meet the judge – and the gallows. Jennifer Jason Lee is his prisoner, Daisy Domergue, currently being dragged in chains to the town of Red Rock for exactly that purpose. Samuel L. Jackson is Major Marquis Warren, Union veteran and bounty hunter of an altogether more pragmatic stripe. Walton Goggins former Confederate bushwhacker Chris Mannix, on his way to Red Rock to become their new sheriff. Demian Bichir is Bob the Mexican, running Minnie’s place in her absence. Michael Madsen is cowboy Joe Gage, heading home to his mother after a long cattle drive. Tim Roth is prissy British expat Oswaldo Mobray, who describes himself as “…the hangman in these parts.” And Bruce Dern, the man who killed The Duke in The Cowboys, is Confederate general Sanford Smithers, now an old man who keeps his own counsel by the fireplace.

That’s a combustible enough mix just on face value, but add to that the possibility that not everyone is who they say they are and things get tense quickly. Ruth is convinced that at least some of his cabin-mates are determined to kill him and free Domergue, while other characters – Warren, Mannix and Smithers, to be precise – have old grudges, personal and ideological, that are about due to be settled. The Hateful Eight is a talkfest – one of QT’s wordiest efforts, I’d reckon – but the threat of violence is ever present, and when it does erupt it is sudden and ugly.

Some viewers have reacted badly to the film, calling it misanthropic* – and yeah, it is, but that’s the point. This isn’t the gleeful nihilism of Tarantino’s earliest efforts, where pastiche existed for pastiche’s sake and people died horribly because it looked cool. The Hateful Eight is a film that dislikes people, but it dislikes them for strong moral reasons that verge on the biblical. “Ya only hafta hang mean bastards,” Ruth intones at one point. “But mean bastards ya hafta hang.” The thing is, in this cinematic universe everyone is mean bastard, to one degree or the other. Nobody is off the hook.

Much of this unpleasantness is rooted in the racially-charged crucible of the Civil War, but as the film progresses it becomes clear that the evil is rooted deeper than that. There must always be a victim, and the instinctive direction of any thrown punch is downward. It’s actually quite uncomfortable at times when points of identification are suddenly twisted and we find ourselves siding with virulent racists, or loathing purportedly heroic figures, until it dawns on you that this is entirely the object of the exercise.

Tarantino’s decision to shoot the film in 70mm is a sound one; although the film is pretty much a one location affair, the first act aside, the wide frame immerses us in Minnie’s Haberdashery, letting the viewer’s eye dwell on a thousand tiny details, props and bits of business in the background of the action. It’s beautiful, really; anyone waiting (or not…) for home viewing is doing themselves a disservice.

Perhaps as a result of the old school charms of 70mm, he also adopts a more classical style than we’re used to. Callbacks to other films are exceedingly subtle, when they’re present at all. It feels like he’s finally realised that he doesn’t have to flaunt his encyclopedic film knowledge at us anymore, like a kid hauling out a boxful of favourite toys to show a family guest; he has all the tools in the box, and he knows how to use them.

The result is Tarantino’s most assured, astute and mature work to date. Yes, mature: all the usual QT touchstones are here (snappy dialogue, savvy cultural awareness, Samuel L. Jackson) but never have they been deployed with such confident skill. This feels like a turning point for Tarantino, and if what we’ve seen here is in any way indicative of what’s to come, the next few years might very well eclipse his early successes. In the meantime, we have The Hateful Eight, a mean, moral monster of a movie.

*…not to mention misogynistic, which it is not – it’s a film about misogyny to no small degree, but it does not endorse it.