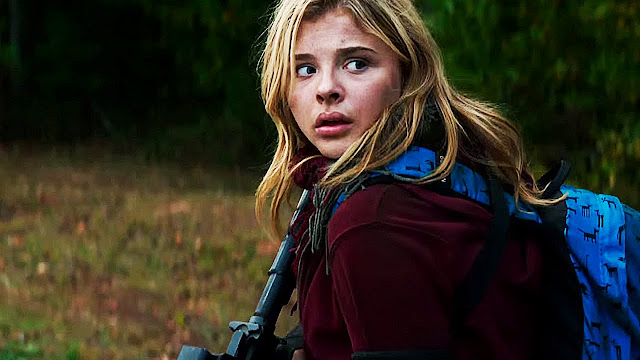 I have the sneaking suspicion I’ve used that subheading before and that’s perfectly appropriate, seeing as how The 5th Wave, whether deliberately or by cultural osmosis, recycles so much too. Following in the footsteps of The Hunger Games, The Maze Runner, and especially Kevin McDonald’s under-appreciated How I Live Now*, here comes another YA novel adaptation following the post-apocalyptic exploits of an introspective teen.

Our hero this time out is Cassie Sullivan (Chloe Grace Moretz), whose achingly normal life is turned upside down when a giant Independence Day-style ship appears in the sky. The aliens within don’t bother with sending in endless squadrons of fighter craft – they take a more pragmatic view of invasion. First they hit us with an EMP that knocks out our electrics (the first wave). Then, earthquakes and tsunamis ala Ming the Merciless in Flash Gordon (second wave). After that, a bio-engineered bird flu pandemic (third).

By this stage of the story we’re pretty much in a world that resembles the early stages of a Fallout game – there’s even a point where Cassie loots an abandoned shop for plastic water bottles whole toting an assault rifle and a teddy bear. After the deaths of her parents (Ron Livingstone and Maggie Siff), Cassie is left with only her young brother, Sammy (Zackary Arthur), but he gets packed off the a military compound by Colonel Vosch (Liev Schreiber), who’s decided to organise an army of child soldiers to fight back. Sammy gets thrown into boot camp along with Ben “Zombie” Parish, Cassie’s high school crush, and a host of Vietnam flick cliches, including bad-ass disciplinary case Ringer (Maika Munroe), whose ability to find black eyeliner after the fall of civilisation is commendable.

Here the film bifurcates into two narratives: an interesting one where children are being militarised and trained to kill for reasons that become increasingly suspect, and a pretty inert one where Cassie teams up with hunky farmboy Evan (Alex Roe) to march across the despite wilderness and rescue little Sammy. Neither are too original – Christ, the training sequences are a PG Full Metal Jacket by way of Ender’s Game – but at least the former doesn’t stop in its tracks to have the protagonists moon over each other at every opportunity.

By the time the film wraps up we get a few revelations about the nature of the threat (I’ve left the fourth wave alone because it’s a nice bit of business if, again, not too original), a bit of action and spectacle, and a big, danging sequel hook because, hey, these things come in threes (with the third split into two in order to wring more money out of the fan base). If you’re undemanding or have some kind of attachment to the source novel by Rick Yancey, then you might enjoy this, but the cookie-cutter nature of the YA SF genre is starting to wear thin.

*Caveat: but nowhere near as good.