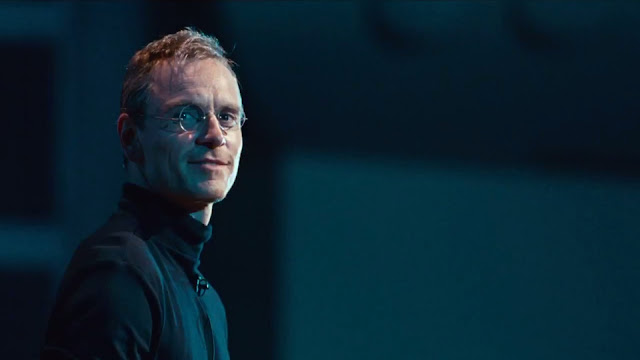 “Print the legend,” the old saying goes, but Steve Jobs eschews that to navigate a trickier path. Simultaneously an act of mythologisation and revelation, Danny Boyle’s film works to both cement Jobs’ reputation as a visionary while at the same time leaving us in no doubt of his clay feet.

Screenwriter Aaron Sorkin sketches the life of the Apple founder in three long scenes, each taking place behind the scenes of a product launch. when we first meet Steve Jobs the man (the chameleonic Michael Fassbender) its 1984 and tech problems are threatening to scupper the launch of the Mackintosh computer. In 1988, Jobs has left Apple and founded his own company, NeXT, and is about to unveil the albatross that is the NeXT computer. Finally it’s 1998, Jobs is CEO of Apple, and the iMac is about to debut.

Through reoccurring characters, plot threads and motifs, Boyle and Sorkin invite us to fill in the gaps for ourselves, using narrative evidence to imagine what has taken place outside the narrow constrains of the film’s three acts. We track the hostile relationship between Jobs and Chrisann Brennan (Katherine Waterston), the mother of his child, Lisa, and the effect it has on that child. We see how Jobs is lauded as a genius while Steve “Woz” Wozniak (Seth Rogen), engineer and co-founder of Apple, lobbies for credit for the backroom propeller-heads who have built the technology the company is founded on. We see the abrasive, driven Jobs berate and alienate those around him in what seems at times to be a quixotic quest for perfection, and how Joanna Hoffman (Kate Winslet), his long-serving, long-suffering right hand struggles to calm troubled waters.

It’s thrilling, engrossing stuff. It doesn’t sound like it, but it is. Partly that’s down to the script – let us all hope that we get biopics authored by Aaron Sorkin, who will give us nimble, snappy dialogue we could never have uttered in real life. Partly its down to Boyle’s bold, assured direction – he goes to great pains to demarcate each time period through using different film stocks and visual cues, and shoots dialogue scenes like action sequences.

In the main, though, it’s down to the performances. Winslet is great as Jobs moral compass, the only person who can stand up to the often-tyrannical “genius.” Seth Rogen is perfectly cast as the self-deprecating, warm Wozniak, the idealist counter to Jobs’ savvy, often cynical capitalism.* Jeff Daniels brings effortless gravitas and charm to the role of John Sculley, Apple CEO and father figure to Jobs.

And then there’s Fassbender as Jobs. Were it not for the enormous weight of lobbying and expectation behind DiCaprio, I’d say this is Fassbender’s year at the Oscars. Fassbender may not be the spitting image of Jobs, but he certainly carries the idea of the man, the mental picture that has accreted around the culture’s treatment of him. His Jobs is driven, egotistical, incisive, difficult, frequently unlikable, and utterly human. Steve Jobs puts the lie to the notion that movies need likable leading characters to succeed. They don’t. They need interesting ones.

The film also puts Jobs in his historical context. It’s easy now, as I type this directly into the blog site hosted in another country while occasionally pausing to check my Facebook, look at Netflix, and check if the game I’m downloading is ready to go yet, to forget how life was before the home computer became ubiquitous, before the net was everywhere, before phones turned into friggin’ tricorders. Steve Jobs takes us from ’84 to ’98 and puts us in the room with a group of very smart, very driven believers who absolutely knew what time it was and knew that the innovations they were developing could, would change the world. If the film lauds one aspect of Jobs, its his ability to take complex technologies and make them accessible to the layman, and if that’s a little thing, maybe you should turf the screen you’re reading this on.

Biopics, more than any other kind of historical film, are subject to accusations of falsehood, and those accusations can be true: the object, after all, is to narrativise a human life, and many concessions must be made in order to do that. the best, however, capture the essence, the contextual meaning, of the life they’re describing, and Steve Jobs definitely achieves that.

*You can bring up Jobs’ hippie credentials if you want. the film doesn’t.