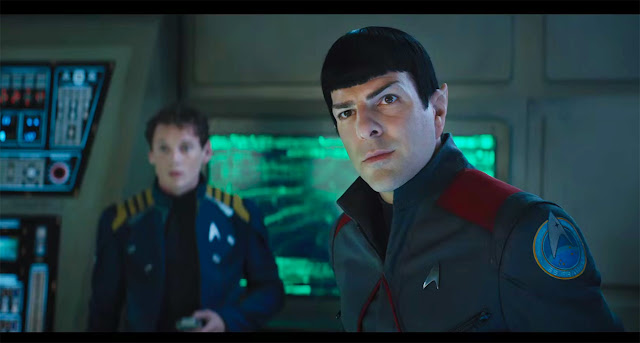 Three years into their five year mission, the crew of the Enterprise are starting to feel the grind. Spock (Zachary Quinto) is wrestling with his duty to the now-decimated Vulcan race and considering resigning from Starfleet to concentrate on helping his people, while Captain Kirk (Chris Pine) is wondering if ship command is for him and considering a desk job at the huge UFP space station, Yorktown. Of course, that might make for a boring movie, but luckily the Enterprise is quickly called away on a rescue mission in the heart of a nebula, where the ship is attacked by an unknown enemy. With the Enterprise destroyed (again!) and the crew scattered on the surface of a strange alien world, Kirk and his crew must work separately to figure out what’s going on, and then together to defeat the villainous Krall (Idris Elba).

This is the first of the Star Trek reboot series that really feels like Trek. The first film is pretty great but has to do a lot of scene setting; the second was an egregious, earthbound misstep that needlessly aped Wrath of Khan to the detriment of its own identity, both as a discrete film and as a part of the ongoing Trek mythos. Beyond, however, nails it. There are plenty of nods and Easter eggs referencing earlier Trek media (although it feels like we’ve seen the last of that – the biggest bit of fan service also feels like the final punctuation mark on TOS), but this film feels like a continuation and an expansion of what has gone before.

A lot of that is down to a smart, brisk script by Simon Pegg and Doug Jung, who have a firm grasp of the defining principles of Trek: exploration, communication, and adventure above violence. Not that the film is free of action – this is a Justin Lin joint, after all, and the Fast & Furious honcho even manages to lever in a motorcycle chase that feels earned. The point is that when Kirk and his people resort to violence, they, well, resort to it – it’s never the first option.

The cast are just  in these roles to the hilt by now, and watching them now is like watching a gestalt of old mannerisms animating new faces. Urban’s uncanny take on McCoy is the high water mark here, but when you also get moments like John Cho leaning in his chair exactly like George Takei did, he’s only ahead by a few points. The narrative takes the opportunity to separate the crew into pairs scattered around the alien world that Krall gets home, which opens up a bunch of fun character possibilities. We get to see Kirk take Chekov (Anton Yelchin) under his wing, while Sulu (John Cho) and Uhura (Zoe Saldana) plot to break the rest of the crew out of Krall’s alien gulag. Best of all, we get McCoy taking care of a wounded Spock, the pair of them sniping away at each other the whole time. It’s magical.

Beyond also throws some nice big SF conceits at us: Yorktown space station is a fantastic environment, a huge artificial world built out of impossible angles and planes. Krall’s attack ships swarm like flying insects, both a great visual and a tactical nightmare in Star Trek‘s world of capital ship space combat. Krall’s world itself is a fascinating one, littered with derelict ships and populated by a variety of aliens who live by scavenging them, including Sofia Boutella’s Jayla, who becomes an ally of the crew (writer Pegg gives his character, Scotty, the most time with her, and why not? Them’s the perks).

In fact, the weakest element in play is Krall himself, who presents as another bumpy-prostheticed alien villain in a long line of bumpy-prostheticed villains. A lot has been made in the pre-release publicity about how Krall is a villain with an ideology, and an understandable one at that, and that’s all true, but it’s a revelation that is kept (by necessity, I’d argue) until the tail end of the third act, so for the bulk of the film you’re just left wondering what the hell this guy’s beef with the Federation is. When it’s revealed, it’s a philosophy in opposition to the the UFP’s (see the bit about guiding principles above), but it’s definitely coming from a place you, as a viewer can grasp. Still, the intent and the execution are miles apart here – Krall as actualised is not not Krall as conceived, one hopes, but you can see what they’re going for. All else being equal, though, he’s played by Idris Elba, who is a supremely watchable performer in just about anything.

Star Trek Beyond is the best thing to come along this blockbuster season – and yeah, that includes Civil War. It’s an incredibly enjoyable SF adventure that manages to both cleave to what made its progenitor great and throw the doors wide to the infinite possibilities that await in the future of the franchise. Trek fans (whatever the hell they call themselves these days) and casual viewers alike will be well pleased.