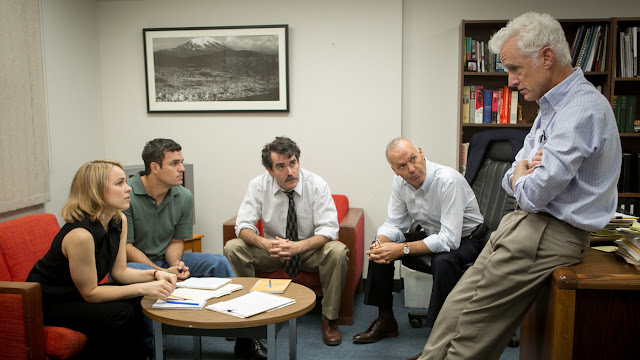 Remember investigative journalism? It’s what used to happen back in the day, before newspaper advertising plummeted and news organs nailed themselves to the 24 hour news cycle out of the sheer desperate need to attract as many viewers and clicks as possible. There was a time when presenting the news was seen as a public service mandate, and the impetus to present good, important news to the populace was viewed as more important than ruffling feathers and keeping advertisers happy.

Now, that’s a bit of rose-tinted myth-making right there, but Spotlight leans into that myth more than a little bit, in incredibly affecting ways. It’s hard to criticise that considering Tom McCarthy’s film centers on the titular investigative team, based at the Boston Globe, who in 2002 blew the lid off the Catholic Church’s ongoing institutional efforts to cover of child sex abuse by priests in Boston.

Spotlight may mythologise a little, but it doesn’t sensationalise. This is a sober, deliberate investigative procedural, and director and co-writer (along with Josh Singer) Tom McCarthy is smart enough to let the nature of the subject matter affect us – and his characters – without resorting to histrionics. His protagonists – largely based on actual people – are both professionals doing a job and Bostonians horrified by what they uncover, but the former tempers the latter and the the resulting mood is one of righteous anger and steely resolve.

The occasional shaky Beantown accent aside, the cast is just fantastic. Michael Keaton, riding high after his Oscar nomination for Birdman (and let’s hope he keeps it up) is Walter “Robby” Robinson, the grizzled news vet who heads the investigative team. Mark Ruffalo is gifted maverick Michael Rezendes. Rachel McAdams is Sacha Pfeiffer, who is forced to try to make her discoveries jibe with  the Church’s important place in her grandmother’s life, while family man Matt Carroll (Brian d’Arcy James) is horrified by the idea of raising his children in a town where crimes of this scale are quietly swept under the rug. John Slattery’s Ben Bradlee, Jr.*, meanwhile, can initially barely bring himself to believe what is happening.

The sense of place is strong here, and you need to get a handle on that to understand how the crimes depicted could have gone on for so long. The film takes pains to illustrate how the Church is woven through the fabric of Boston life at every level – social, political, economic – and that pervasiveness becomes the conspiracies best camouflage – people simply don’t want to know. As the film progresses, it becomes clear how long the cover up has been going and how many opportunities there have been for the truth to surface, only for leads to be ignored and witnesses deflected. Indeed, new Boston Globe editor Marty Baron (Liev Schrieber) is viewed with deep suspicion when he pushes the investigation forward – he’s an interfering out of town Jew, after all, not a good local boy.

That willful ignorance, combined with the monolithic nature of the conspiracy, means that Spotlight is frequently a frustrating experience, as we watch the team encounter closed door after closed door and obstacle after obstacle. This being an classical American film, there is catharsis waiting in the wings, but its hard won and, frankly, does little in the face of the outrages we witness on out journey towards it. That is, perhaps, the point.

In any other year a film of this calibre would have Oscars hurled at it – that its facing stiff competition speaks to what a great year of film we’ve had. Still, it behooves you not to let Spotlight get lost in the crowd; this is an excellent film that deserves an audience.