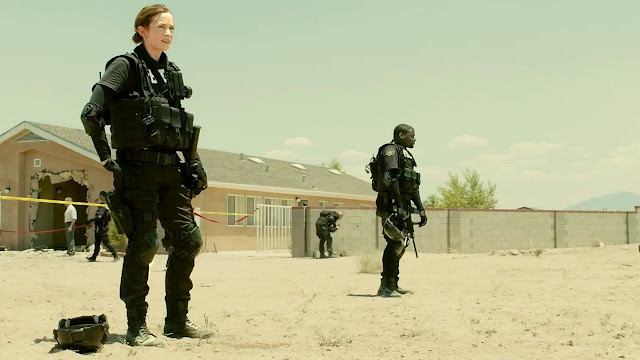 Or is it everyone involved in the whole bloody mess? That seems to be the theme director Denis Villeneuve (Enemy, Prisoners) and screenwriter Taylor Sheridan are digging for: in the battle-scarred borderland between the States and Mexico, everyone involved in the drug war, on both sides, is compromised to some degree, and those who suffer the most are the ones who cling to some kind of moral code beyond simple eye-for-an-eye attrition.

After a disastrous raid on a cartel-owned house leaves several agents dead, FBI door kicker Kate Macer (Blunt) is selected for an inter-agency task force by Brolin’s Matt Graver, a hyper-confident “consultant” who plays fast and loose with the truth. Graver promises that Macer will help get the men responsible for the opening scene’s carnage, but his true aims remain a mystery. As she is drawn deeper into the atrocity-strewn world that Graver and his team operate in, Macer comes to rely on the taciturn Alejandro (Del Toro) as her guide but, like everyone else, he has his own agenda.

An exercise in almost unremitting tension, Sicario is utterly gripping from its opening shots of heavily armed and black-armoured cops stalking through a suburban neighbourhood, to its downbeat, haunting denouement. Scenes of violence are actually few, but they hit hard; far more commonly we come across the aftermath of horror – bodies sealed behind fresh drywall, or hanging from a freeway overpass. Murder and torture are happenstance in this world, and discussed matter-of-factly; at one point a character mentions a little girl being thrown into a vat of acid so blithely, you have to replay what was said in your mind in order to make sure you parsed it correctly. It makes the border look like hell on earth, and a bit of research – Ed Vulliamy’s Amexica is worth a look – shows that’s not an exaggeration.

All this brutality is framed by some of cinematographer Roger Deakins’ finest work. The searing yellows and oranges of the American South West pop on the screen in daytime scenes; at night, impenetrable shadows hint at even greater horrors being concealed. At one point, Macer clambers onto the roof of an American base to watch chaos unfold in the Mexican city of Cuidad Juarez, just over the fence. We see police lights speed through the benighted streets and explosions light the sky. It’s a stunning scene, one that encapsulates the scale and insanity of the conflict as economically and dramatically as possible.

As a filmmaker, Denis Villeneuve has never quite landed for me; I recognise the quality of his work, but each of his films has always seemed somehow off by a few small but crucial degrees. Here, he lights it up, all the elements working in concert in service to story and theme. Sicario is a grim slog through a nightmarish milieu, but it’s one worth taking.