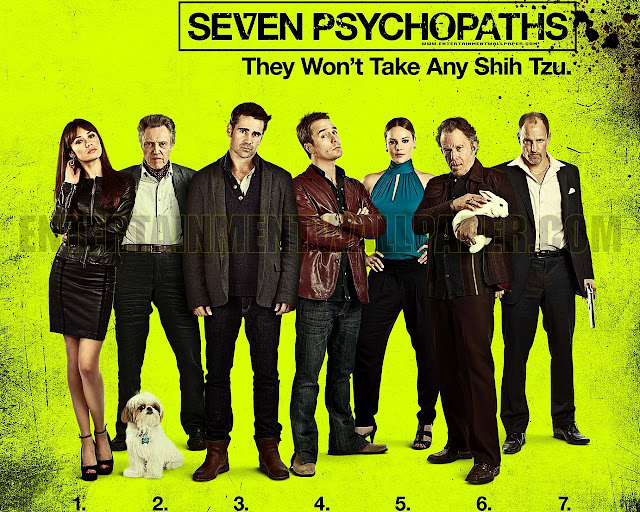 Metatextual Massacre
Directed by Martin McDonagh
Starring Colin Farrell, Sam Rockwell, Christopher Walken, Woody Harrelson, Tom Waits, Olga Kurylenko, Abbie Cornish
Irish writer/director Martin McDonagh reunites with his In Bruges star, Colin Farrell, for this whip smart, brutally violent, and wickedly funny ensemble crime opus.
While alcoholic screenwriter Marty (Farrell) struggles with a script – called Seven Psychopaths, and why not? – his best friend, aspiring actor Billy (Sam Rockwell), ekes out a living by means of a dog-kidnapping scam in which he’s partnered with the soft-spoken Hans (Christopher Walken). When Billy swipes a Shih Tzu belonging to the psychotic gangster Charlie Costello (Woody Harrelson), events are set in motion that will obviously culminate in a bloody apotheosis.
Or will they? McDonagh delights in setting up and subverting expectations here, to excellent effect. Take a cursory examination of the trailer, and the word “Tarantinoesque” springs immediately to mind, but that’s a fairly shallow read. Whereas Quentin and his cronies (and imitators) sift the rich loam of pop culture history for their material, Seven Psychopaths is both a dissection and satire of the kind of hip, violent, shaggy dog stories that came to prominence in the early ’90s, and works to demonstrate how what was once so fresh is now laden with clichés and predictability.
Which alone would be enough, but McDonagh digs further, transforming what could have been just an enjoyably barbed parody into an examination of the nature of fiction itself. As the film progresses, we skip in and out of Marty’s script, the “real” events of the film, and various flashbacks, asides, and fantasy sequences, blurring the line between the real, the fictional.. It’s a weird, tiered, structure that’s confident enough to trust the audience to parse what is actual, what is remembrance, and what is anecdotal.
If it all sounds too much like a post-grad circle jerk, rest assured that the film is consistently entertaining. There’s a robust narrative skeleton holding up all the metatextual musings, and its populated by an array of bizarre characters, portrayed by a truly impressive cast. Farrell gets short shrift as the hapless, booze-addled hack around whom all the chaos swirls, but his natural charm saves him from being forgotten in the shadow of the manic, unhinged Rockwell, who would pretty much steal the show if it weren’t for the presence of heavyweights like Walken and Harrelson, who play off their well-established screen personae. Even the supporting cast is amazing, boasting such notables as Harry Dean Stanton, Gabourey Sidibe, and Tom Waits; hell, even Crispin Glover turns up, if only for a single shot.
There’s a chance that Seven Psychopaths might be a bit too clever-clever for the average viewer, but if you’re a dedicated cinephile, and a Kaufman/Tarantino crossover sounds like your cup of tea, you’re going to want to see this one, and soon.
(First published in X-Press Magazine, Issue 1342, 14/11/2012)