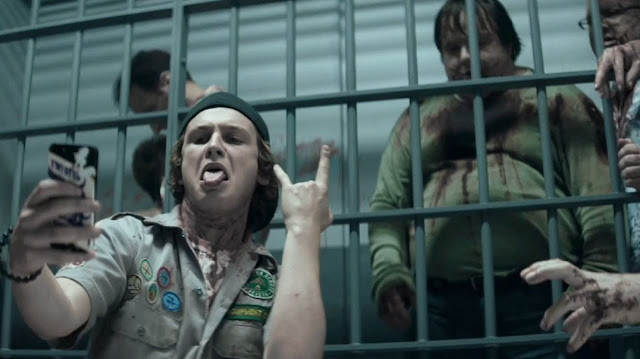 Directed by Christopher Landon
Starring Tye Sheridan, Logan Miller, Joey Morgan
What mad bastard thought that this was a good idea?
Apparently that was writer/director Christopher Landon, best known for writing Disturbia and almost every Paranormal Activity past the first one. Perhaps a more pressing question is, how in the name of all that is unholy did they turn out to be right?
Scouts Guide To The Zombie Apocalypse is an unashamed grab at the 12 year old boy demographic, appealing to the basest notions of gore, sex and violence. Yet it is so unashamedly grindhouse, so aware of what it is, and so unapologetic for this, that it manages to punch right through to the other side. In part this is simply a trick of knowing what it wants to be and pursuing that, but it is more than just a case of under promising and over delivering. There is a distinctive love for the genre, and although the wit may not be Wildean, it is certainly more intelligent than it appears on first glance.
Ben (Tye Sheridan), Carter (Logan Miller) and Augie (Joey Morgan) have been friends for ever, and scouts for almost as long. When Ben and Cater decide they want to leave scouts, they wait till the night that Augie is receiving his Condor Patch (apparently a pinnacle achievement) to break it gently to him. The plan goes awry when they get invited to a hot party, and a local biotech lab triggers the zombie apocalypse. Hey, busy night! With a little help from a local cocktail waitress (Sarah Dumont), it is up to the boys to survive the plague, save the party, and solidify their friendship.
Pretty standard stuff.
Alright, let’s look at the real stars of the show, the zombies. These shambling mounds of tired, overused, pseudo-social commentary get a small jolt of fresh unlife. In general, these are your standard modern zombies, engaging in the usual horde shuffle, with burst of manic speed to add tension (thanks, 28 Days Later). What Scouts Guide does differently is giving them a hint of a previous life. Like in Shaun Of The Dead where the line between our un-engaged mundane lives and the zombie apocalypse is blurred, here a similar device is used postmortem, so zombies whiz around on mobility scooters, bounce on trampolines, or sing along to Britney Spears, all with just a tinge of black humour. It’s about as subtle as a fat zombie in a YOLO tee shirt, but the film nails its comic timing, and brings us a lot of laughs in among the sprays of arterial blood. Add a couple of undead animals to that mix and things get even more imaginative.
Scouts Guide also brings us a lot of the expected gore. From the blood-smeared biolab window to a power-tool rampage through a zombie horde, this is a film that leans into the splatterfest.  It ticks the horror staples box by providing some imaginative and breath-taking kills. Here again it has a tendency to lean into its comic elements, combining humour with the gore, but there is plenty of the red stuff. It walks a fine line between its elements, and if anything tends to err on the side of horror. As such, there are times it can be a little mean spirited and down right cruel to some of the support characters, but this is nothing new of the genre (right, Walking Dead fans?).
It’s in the film’s sexual politics that we are on shaky ground. It’s treatment of women in general is relatively poor. It’s an adolescent boy’s fantasy after all, with women as objects of desire or damsels in distress. Thankfully there is one strange exception to this in the character of Denise (Sarah Dumont). A waitress at a strip club who first appears as titillating eye candy soon becomes the kick-butt zombie-dispatching mentor of the young boys. So competent is her bad-arsery that the script actually conveniently rids us of her for the third act, just so the boys could actually get some room to shine and be heroes in their own film. It’s a big surprise to see such a competent female action hero in this film, especially when the gender politics of the rest of the film bears more in common with a Gamergate thread.
A revenge of the nerds zombiefest that is vaguely reminiscent of early Raimi and Peter Jackson. Scouts Guide To The Apocalypse might be of a lesser quality, but nowhere near worthy of the premature burial that it is getting critically. Gleefully B-grade fun.
DAVID O’CONNELL