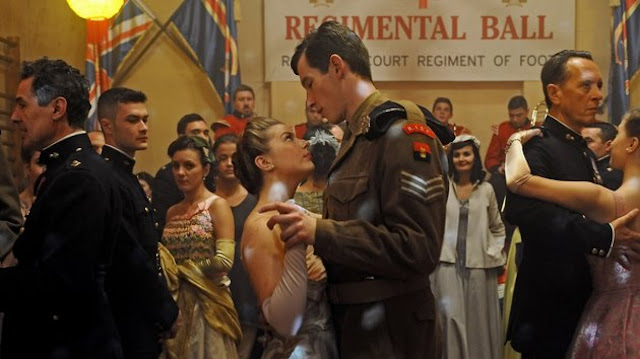 Legendary British filmmaker John Boorman returns to the adventures of his onscreen alter ego Bill Rohan (Callum Turner) in this much-delayed sequel to his 1987 semi-autobiographical film, Hope And Glory.

It’s the ’50s, and Bill’s idyllic life at his family home on a Thames island is disrupted hen he’s called up for the draft. Rather than getting shipped off to fight in Korea, Bill finds himself charged with teaching new recruits how to type, along with his bunkmate, the roguish Percy (Caleb Landry Jones). The pair contend with vicious, officious officers, mainly the by-the-book Bradley (David Thewlis), and the monotony of military life, while at the same time trying their best to get laid.

The obvious touchstone here is Neil Simon’s Biloxi Blues, and Queen And Country shares that work’s sense of gentle rebellion and fond remembrance. Boorman has never been to shy away from the mythopoeic and archetypal – he made Excalibur, for God’s sake – and he paints a picture of ’50s England that leans into the trappings of patriotic myth while at the same time decrying the bureaucracy and blind traditionalism that sends young men off to die. It’s a green and pleasant land run by blinkered automatons.

Boorman’s film is not so coarse as to come out and just say that, though: it’s all in the petty wars fought by Bill and Percy against their superior offers, the most valuable piece of territory being the regimental clock the two steal simply to drive their tormentors mad. Meanwhile, Bill pines for the tragically romantic upper class girl, “Ophelia” (Tamsin Egerton), named for the Shakespearean doomed damsel, who promises a kind of idealised love that seems finer to him than the more worldly nurses that Percy pursues.

Boorman has said that all the key incidents here actually happened, and if their depiction often feels like something we’ve seen a thousand times before, well, maybe that’s because that’s how cliches work: the real world common experiences are just that common. Queen And Country is familiar, but in a comfortable, welcoming way. It’s funny, it’s warm, it’s wise, and if it proves to be the octogenarian director’s last cinematic effort, it’s a fine send off.

Queen And Country is playing as part of the Lotterywest Festival Films Season from Tuesday, December 8, until Sunday, December 13. Go here for tickets and session times.