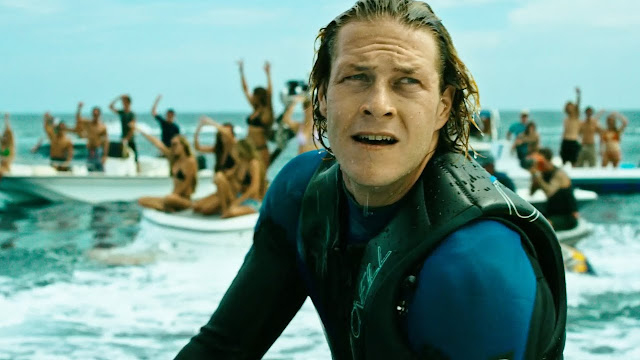 In my part of the world (Perth, Western Australia) the Point Break press screening was held on December 30, right in the sweet spot between Christmas and New Year’s, when anyone who could swing it was on vacation. It was also held at an outdoor cinema with a forecast of rain. You could almost believe the powers that be didn’t want anyone seeing the thing, or at the very least writing a review about it before it limped quietly into theatres on the 31st.

And with good reason.

There’s no particularly strong reason not to remake Point Break, putting aside the obvious fact that Kathryn Bigelow’s 1991 original is still a pretty gutsy little action flick today. Indeed, a certain seven-installment-and-counting franchise has spun gold out the simple assertion that “The Ex-Presidents are illegal street racers.”  The problems that cripple the 2015 version are not native to its status as a remake; they’re systemic, rising from a a script that has nothing to say about its characters, its story, its (murky, barely there) themes, even the world it purports to inhabit.

Australian actor Luke Bracey is Johnny Utah (nee Brigham because, fuck it, trivia is better than characterisation), a former extreme motorcross personality who chucks it all in and joins the FBI when his bro dies in a frankly laughable credits sequence. Esteemed character actor Delroy Lindo is the authority figure who doesn’t think the tattooed, surly Utah* has what it takes, until Utah brings some insight into a series of daring, high-level robberies undertaken in a number of countries.

The perps, of course, are spiritual sportsman Bodhi (Edgar Ramirez) and his buddies, no longer called the Ex-Presidents and no longer restricting themselves to surfing and a the odd spot of skydiving. World-travelling, multi-talented extreme sportsmen from Planet YouTube, Bodhi and co. hop from country to country, undertaking the “Osaki 8” – a series of punishingly difficult stunts alleged to put those who complete them in touch with nature, nirvana, whatever.

Along the way, however, there are all those robberies, complete with body counts, and that’s where Bodhi’s post-hippie patchouli-talk falls flat. In PB ’91, Patrick Swayze and the boys were robbing banks to finance their lifestyle – a selfish but understandable motive. Here, Ramirez and his posse even have a financial sponsor, a millionaire with an X-Games fetish, so their crimes are meant to have some deeper meaning. Sure, they shower bales of American money on poor Mexican farmers and dynamite polluting gold mines, which should slow ’em down for a good week or so, but their posturing, their flailing at “The Man” is largely senseless. for all the film’s attempts to imbue Bodhi with a sense of the spiritual, he comes across as an alpha-bro douche, paying lip service to a philosophy he doesn’t believe in order to justify his choices. His minions are even worse.

That’s a problem if we’re supposed to believe that Utah, traumatised by loss and desperate to prove himself to his FBI bosses, can be seduced by the life Bodhi offers**. But none of the relationships in this film ring true, and so the stakes never feel tangible. Utah and Bodhi’s bromance fails to convince, as does Utah’s brief fling with Samsara (Teresa Palmer), a character who leans so hard into the wand’ring starchild/manic pixie dream girl trope that she barely registers as a person. Likewise, there is no bond between Utah and his handler, Pappas, played by a criminally under-utilised Ray Winstone. There is no emotional connective tissue here, not even the most rudimentary kind. It’s all just smoke and fortune cookie wisdom.

The end result is that, for all its real time stunt work and stunning locations, For all its pre-release boasting of suing real extreme sportsmen in real places to take real risks, the action in Point Break is boring. Action fans learn to accept a lot of narrative shortcomings in the name of good, thrilling spectacle, but there’s a point beyond which it all just fails to work – a breaking point, if you will, and this movie exists beyond that. For a work built around the visceral joys of physical extremes, it’s incredibly lackluster and plodding, limping toward its inevitable conclusion with the leaden inevitability of the grave.

Utah 2.0 does get to shoot his pistol in the air and yell “Aargh!” though, so there’s that.

*Tell you what, the FBI’s dress standards have really slipped in the world of Point Break.
**Or Bodhi himself. Where Bigelow’s flick had a fair share of ho-yay, the new Point Break is a light rewrite away from slash fic.