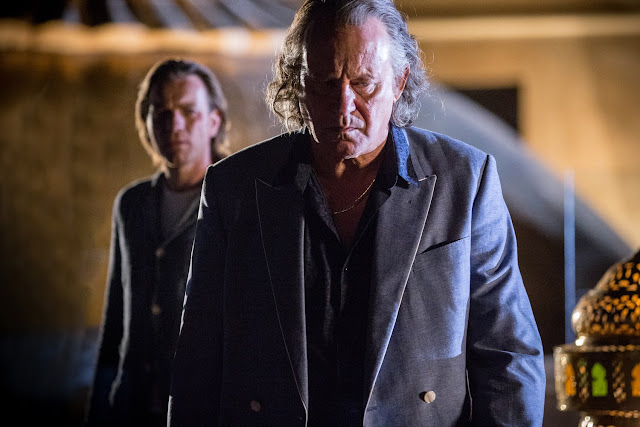 Renowned for his Cold War thrillers and his insight into the UK espionage practices of this period, John Le Carre has been the “go to” novelist for the more realistic end of the spy genre. Our Kind Of Traitor is one of the author’s later works covering the world after the fall of the Iron Curtain and the rise of the Russian Mafia.

While in Marrakech on holiday with his wife, poetry lecturer Perry Makepiece (Ewan McGregor) finds himself approached by a member of the Russian Mafia with an unusual request. As a man with a strong moral compass, Perry is unable to refuse Dima’s (Stellan Skarsgard) appeal to protect his family, and acts as a go-between to MI-5 on behalf of the Russian. As a numbers man for the mob, Dimi offers details of illegal funds being siphoned through London financial institutes. In return he wishes assurances of safety in England. To do this Perry must once again place himself in the cross-hairs of the Bratva, to facilitate the defection. However British intelligence isn’t being entirely honest with him about its plans.

A solid thriller, Our Kind Of Traitor does what it does well. It doesn’t suddenly turn a University professor into the next reincarnation of Jason Bourne with a “particular set of skills” acquired from absolutely nowhere. It doesn’t throw you twist after improbable twist – piling betrayal on “inevitable but unexpected” betrayal. It just lays out a neat little drama with elements of espionage and follows it through logically, and in a real world fashion. For those raised on Bond that seems like a slight let down, and in truth this is a minor Le Carre work lacking a bit of the punch of its better known stable mates, but it does deliver a very satisfactory dip into this world of cloak and dagger.

By far the best thing about Our Kind Of Traitor is the cast. Skarsgard utterly owns this film, demanding attention every time he is on screen. He inhabits the role in such a way that we are no longer afraid that the tattoos he is sporting are real, but instead hoping that he didn’t get himself thrown into a Russian prison to earn them the old fashion way. Dima is electric as a desperate man that finds himself running out of options and is willing to risk all to save his family. He is big, boisterous, and coldly dangerous when pushed. Damien Lewis acts as a contrast to this, the career spook who has given up family for Queen and Country. It is between these two extremes that Ewan McGregor acts as our point of view character, an Everyman thrust into extraordinary circumstances. As such he is far too grey, given very little to work with as far as characterisation, and McGregor doesn’t exercise enough of his personality to make the character stand out. As such our main protagonist really does become lost in the background.

Other than that, there really isn’t much else here. Besides some wonderful location filming (the location scout certainly earned their paycheque with the Parisian suburbs location alone),  this really is exactly what it says on the tin. Director Susanna White (Nanny Macphee Returns) may not wow with explosions and car chases, but she does thrill with its slow burn tension, and even manages an effective gut punch at the end. Thoughtful, low-key, and believable.