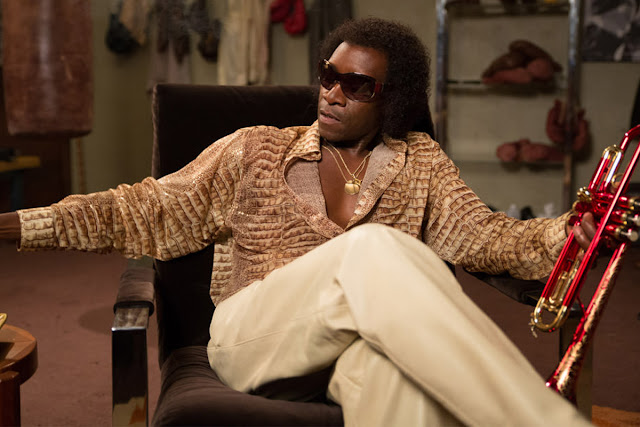 Don Cheadle’s long-in-development biopic of music legend Miles Davis is barely a biopic, measured by our usual understanding of the form. It’s a riff, an energetic burst of noise and colour that takes key elements from Davis’ life and legend and extrapolates new patterns from them. How appropriate.

The frame of the film is fiction, mostly. During Davis’s hazy mid-’70s wilderness years, Rolling Stone reporter David Brill (Ewan McGregor) tries to blag his way into the reclusive genius’s New York apartment for an interview. Davis’s label want something in the apartment, too – the recordings that he’s been noodling on for years. When amoral A&R guy Harper Hamilton (Michael Stuhlbarg) lifts the tape during a party, Davis is determined to get it back, and shanghais Brill into acting as his driver and bagman. And we’re off.

Around and in between the action of this weird heist caper, Cheadle inserts episodes from Davis’s earlier life. In dreamlike, stream of consciousness fashion we see the rise and fall of his relationship with dancer Frances Taylor, his gradual ascendancy to the top of his field, his clashes with racism (the famous nightstick to the noggin incident is portrayed), the women, the drugs and – always – the music.

This is an impressionistic take on not just Davis’s life but Davis’s meaning, as an artist and as a cultural figure. It’s a shame we don’t get as much time with Davis the man, though; Cheadle’s surface-perfect portrayal is mesmerising, but Davis was such a mannered character, sheathed in affectations and prickly with don’t-fuck-with-me energy, that any attempt to dig further than what he allowed the world to see would be a fraught endeavour.

So, this is what we get: a frantic, cool, coke-line of a movie that chooses to print the legend because the legend matters. By the time the credits roll we don’t understand Davis any more than we did when the movie started, but a hundred minutes in his virtual entourage is time well spent.

Miles Ahead is playing as part of the Lotterywest Festival Films Season until Sunday, March 20. Go here for tickets and session times.