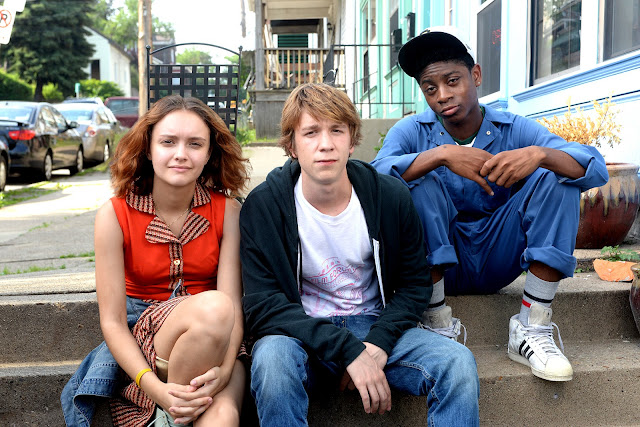 The teen weepy subgenre hits its absolute nadir with this tone-deaf, gormless adaptation of Jesse Andrews’ novel of the same name.

The “Me” of the title is Greg Gaines (Thomas Mann), a very smart, very disaffected underachiever who keeps all and sundry at arm’s length and negotiates high school with an aim to be on good if shallow terms with everyone. His plan comes undone when his mother (Connie Britton) tells him that one of his classmates, Rachel (Olivia Cooke), has been diagnosed with leukemia and badgers him into spending some time with her. Greg is reluctant, but the more time he spends with her, the more he learns about himself, his place in the world, and his inner…

I would love to play it cool and carefully pull apart Me And Earl like a pithed frog in a high school science class, but I can’t. This is where critical distance takes a holiday. Gomez-Rejon’s film isn’t just bad, it’s offensive – a navel-gazing, cheaply sentimental exercise in award-baiting, carefully calibrated to get festival juries salivating and the easily manipulated crying. It’s dross.

Numerous figures parade across our screen – apart from those already mentioned, Nick Offerman crops up as Greg’s boho father; Jon Bernthal as a tattooed, hipster history teacher who acts as a mentor figure; and Molly Shannon as Rachel’s brittle, alcoholic mother – but there’s only one character, and that’s Greg – the most insipid and shallow protagonist since Ferris Bueller.* Every other figure is important only inasmuch as they impact on Greg’s life. Even Rachel, the Dying Girl of the title, is a cypher, and her impending doom matters only because it makes our “hero” question his meaningless spit of existence for a brief span.

Earl, played with deadpan charisma by Ronald Cyler II, is also a shadow puppet of a character, although one given a bit more colour, if you’ll pardon the term, than poor, pale Rachel, whose key job is to look impossibly pretty for a chemo patient. Earl’s a black kid from the wrong side of town, his mother a shut-in, his older brother a thug. He’s a guy with real problems – and Rachel’s a girl with real problems – but we never get any insight into them because, hey, he’s not the troubled white kid at the centre of our narrative. Greg vacillates over whether or not to go to college; we never find out if Earl even has that option. Hell, we never find out what Earl wants, if anything – he exists only to drop some truth bombs on Greg in classic Magical Negro style, and to explicitly state Greg’s intimacy issues. Greg’s so cut off he won’t even call Earl, who he’s known since kindergarten, his friend. No, they’re “co-workers,” apparently – and what “work” do they do together?

Christ, if there’s anything awards voters love more than a “dying young” story, it’s movies about movies** – even the sub-Be Kind, Rewind purposely shitty parody shorts that Greg and Earl churn out. They’ve made more than 40 of the things, apparently, and Gomez-Rejon shows us all of them, using the things to fill gaps in the narrative like spackle. Seriously, if they took out the parody clips and the passage-of-time montages, Me And Earl would be about 40 minutes long.

But the film has to have them, dammit, because this is not your usual romantic coming of age story – Greg’s intrusive, carefully-ironic-but-not-really voiceover tells us so again and again (it even, at several points, flat out lies about a key upcoming story development just to set up an emotional suckerpunch. Yes, that is shitty writing – I’m glad you asked). This is one manchild’s idiosyncratic take on the getting of wisdom – that’s why it has repeated stop motion animation interludes, wry observations on the tribal nature of high school subcultures, wacky authority figures (Offerman eats weird food! Bernthal has tattoos!), and pretty much every other hackneyed trope used to disguise rote emotional manipulation as cocksure artistry. Set dressing stands in for characterisation, with images of Truffaut and Herzog films attempting to lend Greg some depth and complexity – but there is none. He’s another spoilt white kid temporarily dragged out of his comfort zone by being forced to interact with people undergoing actual trauma and catharsis.

To be fair, there are moments that raise a smile – the cast is game and engaging, and Gomez-Rejon is certainly a technically proficient filmmaker, but make no mistake – Me And Earl And The Dying Girl is a garbage fire of a film, built to assure privileged, self centred kids that they have souls, and that the tragedies of others merely serve as fuel for their own life aspirations. There have been worse films released this year, but they fail in mechanical ways – they’re badly put together, or don’t live up to their potential. This one… this one is actually fucking poisonous.

*You know I’m right. Bueller, at least, had charm, but he was a solipsistic little prick.

**Well, that and the Holocaust, and the closest Me And Earl gets to that is to use a frail, bald Jewish girl as its narrative engine – wait a minute…