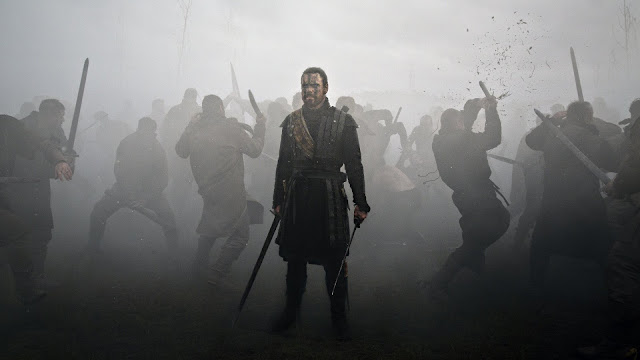 With his feature film debut, Snowtown, Australian director proved beyond the shadow of a doubt that he had a pretty good handle on concepts like “downbeat” and “troubling.” Clearly he wanted to make sure he hadn’t gone soft on us, deciding to make a new adaptation of Shakespeare’s dour Scottish Play his second full-length effort.

It certainly starts well. We meet Macbeth (Michael Fassbender) as he and his wife (Marion Cotillard) are burying their young daughter, and then are catapulted right into a ferocious battle sequences, rendered in super slow motion, where our titular antihero puts down a rebellion against rightful King duncan (David Thewlis, who could do this stuff in his sleep). The witches (four instead of three here – there’s a creepy kid in the mix) the murder of Duncan, Macbeth’s ascension to the throne – all solid stuff, creatively staged and beautifully shot by Adam Arkapaw.

But then, we’re seeing Macbeth consolidate his power and wrestle with his guilt (kind of), we see atrocity mount upon atrocity (MacDuff’s family are burned alive), we see misery and madness and brutality and it goes on and on… and Birnam Wood can’t come to Dunsinane fast enough.

It’s largely a tonal problem. Kurzel begins with his pedal to the floor (a kid’s funeral will do that) and then doubles down, giving the film nowhere to go in terms of mood, and no room to breathe. It’s like if Darren Aronofsky directed a stage adaptation of Kurt Cobain’s suicide note – as an exercise in pure misery, it does the job, but do we need this much misery? Just because you can do a thing doesn’t mean you should. Kurzel’s Macbeth charts a flat trajectory for the length of its running time – it can hardly get any darker, and Kurzel point blank refuses to make it any lighter, and so we’re left with one, long atonal hum of despair for 113 minutes.

Worse, the characters are largely opaque to us. Scenes and dialogue that should let us into the inner life of these players land with a thud. It’d be nice to say that Fassbender and Cotillard are doing good work – and they very nearly are – but no matter how good they look in their roles, how much they emote and sink their teeth in what they’re given to work with, how much we’ve liked them in other things, if we do not feel for their characters – not just because of our familiarity with the source text but specifically because of what they’re actually doing here – how can we?

The rest of the cast suffer similarly – only Sean Harris’s MacDuff gets to do anything of real interest, and that’s just lean into the rabid rage of his grief.

There are beats that must be hit in order for the Macbeth story to work, such as the appearance of Banquo’s (Paddy Considine) shade – but they’re either mishandled or not given enough narrative punch for them to do the work they need to do. It’s a truly odd adaptation; as a general rule, Shakespeare’s works need to cut down drastically in order to work as movies, but the choices here of what to discard and what to retain, what to restage and what to keep verbatim, are just confusing.

Macbeth ends with a bang – again, say whatever else you want, Kurzel can stage a gripping fight scene, and Arkapaw could shoot a white wall and make it beautiful. The denouement sees a little extra business that hints at an attempt at a more complex statement about the eternal, dynastic nature of ambition and violence, but it’s too little, too late. I don’t think Kurzel’s an idiot – I think he’s a hugely talented filmmaker – but his Macbeth is full of sound and fury, signifying, if not nothing, then very little.