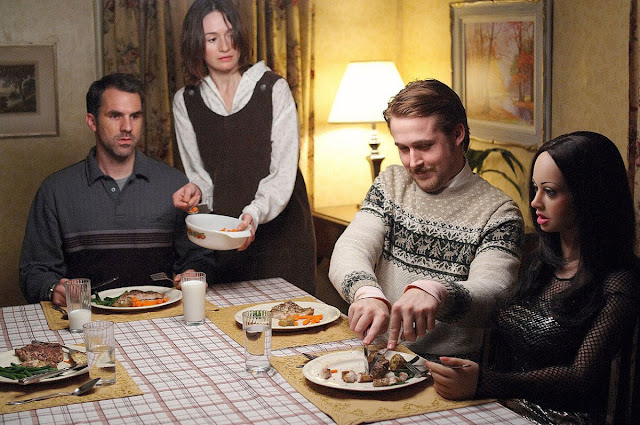 This review goes out to Patreon supporter Jessica Peake. If you want me to talk about a movie of your choice, or you just like what I’m doing here and what to keep me in cheap spirits and popcorn, consider supporting my Patreon campaign.


Lars And the Real Girl is the movie where Ryan Gosling dates a sex doll and insists that his friends and family treat her like a real person. If that sets alarm bells ringing, I don’t blame you. But what could have been a horrible mashup of some the worst and most common traits of quirky indie fare is instead a gentle and sadly funny look at social dysfunction, thanks to strong performances and a sensitive, nimble script.

Gosling is the titular Lars Lindstrom, an introverted and alienated young man who lives in his brother Gus’s (Paul Schneider) garage in a small middle-American town.. Lars has an office job and some limited social interaction, largely via church, but there’s something vital missing. His pregnant sister-in-law, Karin (Emily Mortimer) tries to get through to him, but to no avail. Something is rotten in the state of Lars.

And then one day Lars announces he’s got a girlfriend. Her name’s Bianca, she’s a Dutch/Brazilian missionary who is confined to a wheelchair, and she’s coming to stay for a while.

Of course, Bianca is a RealDoll – and they’re a real thing – but Lars isn’t using her for sex. No, the shy and lonely Lars needs a kind of surrogate partner to let him experience a kind of community life that he has so far been unable to engage with: dinner parties, social outings, and what have you. There’s some grumblings from the cheap seats – Gus in particular objects to Bianca, mainly out of concern for his brother’s mental health – but the townsfolk, spearheaded by Karin and the level-headed town doctor (Patricia Clarkson), largely accept Bianca, and she quickly becomes part of the fabric.

None of this is played for cheap laughs, and that’s what is most intriguing about Lars And The Real Girl. It’s easy to imagine a coarser, mean-spirited version of this basic story where Lars is the punchline of every joke, but the extant film is incredibly warm and compassionate. Bianca is clearly an externalised symptom of a deep hurt and the people around Lars recognise this and act accordingly, even to the extent of treating Bianca as real even when he’s not around. Bianca even gets elected to the school board, an event that takes her outside the realms of “emotional crutch we don’t want to break” and into something more complex. Bianca, it seems, is the friend the whole town needs, not just Lars.

This whole precarious  construction of whimsy and melancholy would tumble without solid performances to anchor it. Gosling might be just a tad too pretty for an alienated loner, but he imbues Lars with palpable pathos and awkward longing. His gradual transformation as he comes to terms with and begins to demonstrate his emotions, including his affection for co-worker Margo (Kelli Garner), is believable and quite moving. Mortimer’s Karin is a staunch beacon of empathy and kindness and, in his own everyman way, so too is Schneider’s Gus. And Patricia Clarkson is as excellent as ever as the quietly insightful Doctor Berman.

Being largely about overcoming internal difficulties, Lars And The Real Girl lacks much in the way of external drama or threats, and that’s to its credit: complicating Lars’ journey through artificial conflict would only detract from it. This is thoughtful, perfectly formed indie drama that goes about its business with clarity and compassion. Going in, we know that Bianca is only going to be temporarily sojourning with Lars and his people – she’s an agent of catharsis, after all, not an end goal –  but the time they do spend together is worth sharing.