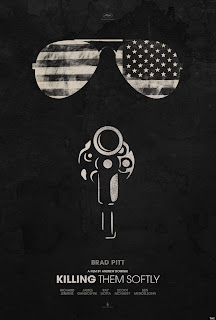 Crime & Punishment
Directed by Andrew Dominik
Starring Brad Pitt, Scoot McNairy, Ben Mendelsohn, James Gandolfini, Ray Liotta
Australian director Andrew Dominik has made three great films in his career. The fact that his career only spans three films means that, so far, his hit rate is incredible. After the blackly comic pseudo-biopic, Chopper, and the epic, elegiac Western, The Assassination of Jesse James by the Coward Robert Ford, he’s has turned his caustic eye on modern American crime – and modern American economics – in this adaptation of the novel Cogan’s Trade by George V. Higgins.
When two low-rent thugs (Scoot McNairy and Ben Mendelsohn) rip off an illegal card game run by the amiable Markie (Ray Liotta), hitman Jackie Cogan (Brad Pitt) is brought in to clean up the mess, ensuring that the criminal economy gets back on track. Through a series of arch, oblique, and often blackly hilarious conversations and confrontations, Dominik draws parallels between the mainstream world and the criminal milieu, stripping away the illusion that they are different in any measurable way, bar one: at least the crims are honest about what they do and why they do it.
It’s a morally murky and incredibly unforgiving film. Anyone expecting the cool caper promised by the trailer is in for quite a shock; this is no sub-Tarantino pastiche. It’s an indictment, not just of the brutal realities of free market capitalism, but of the lies we tell ourselves in order to exist in such a system.
Which all makes it sound like a joyless dirge, which is incorrect. Though the film does little to put its audience at ease, there’s much to enjoy here all the same. The performances are across-the-board brilliant, from Pitt’s laconic killer, to Mendelsohn’s disgusting bottom-feeder, to James Gandolfini’s brief but award-worthy turn as a hitman on the downslope of his career. Cinematographer Greig Fraser frames the film’s urban setting with a strange kind of beautiful clarity, which makes the occasional moments of shocking violence even more gut-wrenching, and although the film is largely dialogue driven, the sense of impending danger is never absent – there are conversations here more suspenseful than any action scene.
If there’s a criticism to be levelled, it’s that the film often chooses immediacy over subtlety, hammering points home rather than leaving them for the audience to discover. Some of the musical choices are on the nose – do we really need “The Man Comes Around” again? – and the decision to set the film during the 2008 Presidential election, while effective, is a tad overdone – apparently every criminal in America was following the race.
Clocking in at a brisk 90-odd minutes, Killing Me Softly doesn’t waste any time. It’s a lean, brutal, crime thriller that’s coming from a place of honesty, not simply wallowing in grindhouse excess like so many superficially similar films. It’s violent, smart, funny, astute, honest, and uncompromising – what are you waiting for?
(First published in X-Press Magazine Issue 1339 10/10/2012)