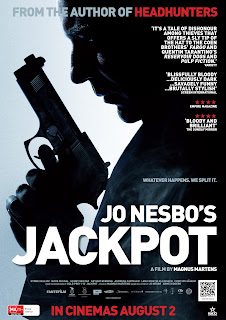 Football Fever
Directed by Magnus Martens
Starring Kyrre Hellum, Henril Mestad, Mads Ousdal, Arthur Berning, Andreas Cappelen
Every modern crime movie trope is cheerfully thrown into the mix in this bloodily violent and blackly hilarious Norwegian film that reminds us of a not too distant time when thrillers were fun.
Based on a story from acclaimed crime novelist Jo Nesbo – the sleek caper film Headhunters was based on one of his works, and no lesser talent than Martin Scorsese will soon be adapting his novel The Snowman – the film opens with a massacre in a porn store, with the unlucky Oscar (Kyrre Hellum) being the only survivor, found by the police under a dead stripper and clutching a shotgun. The story unfolds in a series of narrated flashbacks, as Oscar tells his tale of woe to detective Solor (Henrik Mestad).
A supervisor at a Christmas tree factory that employs ex-cons, Oscar makes the mistake of getting involved in a football betting scheme with three of his workmates, an error complicated by them actually winning an impressive windfall. It isn’t long before greed and mistrust rear their ugly heads and the bodies begin to stack up, with hapless innocent Oscar caught in the middle.
Or is he? The DNA of a dozen films is present in Jackpot, with early Tarantino and Guy Ritchie being the most obvious candidates for paternity, but director and screenwriter Magnus Martens also borrows a lot, structurally and thematically, from The Usual Suspects, with Oscar in the Keyser Soze role. As an audience, we’re never sure how reliable his testimony is, but that’s a detail of the film rather than the main point – the story moves along at a brisk pace and the colourful cast of characters are engaging enough, so it’s best just to go with the flow rather than try to outthink the twisty narrative.
Indeed, Jackpot is more a comedy of errors than a crime thriller, with each of the desperate but not too bright characters pursuing their own wrongheaded agenda. Psychotic Billy (Arthur Berning) simply wants all the money and is willing to kill to get it, while ageing crim Thor (Mads Ousdel, perhaps the highlight of the excellent cast) has old debts he needs to pay off, and amiable alcoholic Treschow (Andreas Cappelen) simply wants to stay sozzled. The joy of the film is watching how these moronic miscreants fail to cope as the situation escalates and the odds of any of them walking away with their winnings seems more and more unlikely.
Truthfully, there’s nothing here you haven’t seen before, at least in terms of plot. But Jackpot wins largely because of the charm of its cast and the energy of its pacing. It feels like one of the plethora of hip, fast-talking crime films we got in the wake of Pulp Fiction, but one of the better ones – a Things to Do In Denver When You’re Dead rather than a Love and a .45. If you find yourself with an itch for the sort of thing Quentin used to do before he started his journey into ever more self-indulgent genre exercises, Jackpot will scratch it.
(First published in X-Press issue 1329, 01/08/2012)