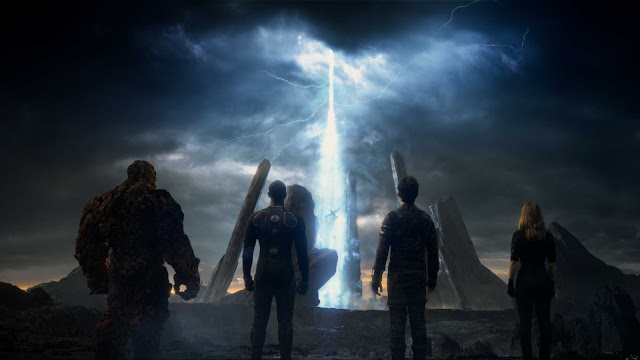 Is it really that hard to make a decent Fantastic Four movie? Because when it comes to shitty big screen adaptations of Marvel’s First Family, we’re four for four. And while it my sound like hyperbole, this latest effort is the worst of the lot. Yes, that includes the 1994 Roger Corman-produced stinker; that, at least, had heart.

This latest offering does not. What it does have, almost unremittingly, is a weird kind of aggressive joylessness. This story of four scientific adventurers imbued with strange powers is serious business, apparently, and director Josh Trank (the pretty agreeable Chronicle) and screenwriters Simon Kinberg and Jeremy Slater have gone out of their way to make sure we don’t forget it. In doing so, they themselves seem to have forgotten what makes us invest in a movie: relatable characters, recognisable, escalating stakes, drama, tension – that sort of thing.

It’s a damn shame, because the film actually shows a lot of promise out of the gate. We meet Reed Richards (Miles Teller) and Ben Grimm (Jamie Bell) when they’re kids, and Reed’s frighteningly high IQ is already making itself known. The two outcasts – Reed is shunned because of his brains, while Ben is from a rough home on the wrong side of the tracks – are drawn to each other, and when we meet them again, Ben is Reed’s right hand man, helping the genius work on the teleportation device he’s been tinkering on since he was in short pants. When they show off their project at the school science fair, they attract the attention of Professor Franklin Storm (Reg. E Cathey) and his daughter, Susan (Kate Mara). Storm informs Reed that what he’s built isn’t a teleporter but a way to travel between dimensions, and he invites Reed to work at the Baxter Foundation, where he’s been working to crack the same problem.

At the Foundation, Reed works with Victor Von Doom (Toby Kebbell), a brilliant but arrogant and unstable scientist, to perfect the device. It’s Von Doom, naturally, who convinces Reed to use the device rather than allow military or NASA pilots to make the first transdimensional trip, and it’s Von Doom who is seemingly lost when it all goes pear shaped. As those au fait with comics lore already know, Reed, Sue, her tearaway brother, Johnny (Michael B. Jordan) and Ben  are gifted/cursed (delete where appropriate) with powers – stretching, invisibility, pyrokinesis, and being a giant orange rock monster, respectively – and must learn to work together as team to take on Von Doom.

If you think that’s an awful lot of exposition to cram into a review, well, what can I say? – you haven’t seen the damn film, which takes its turgid time getting us to a point where our supposed superheroes get their superpowers. Initial promise – the scenes involving young Reed and Ben seem downright Spielbergian – gives way to the unshakeable sense that trank and his cohort really don’t want to be making a superhero film, and the result is a dour, plodding unintentionally laughable affair that vacillates between super-serious, poorly conceived dialogue scenes – I swear to God, 80% of the film takes place in grey, windowless rooms – and grudgingly and fleetingly dealing with the contractually-obliged sturm und drang in the most perfunctory and cliched ways imaginable.

It’s difficult to pin down exactly where the film goes wrong – it’s a pile-up of a thousand poor choices, resulting in one giant mountain of meh. Hazarding a guess, though, the film seems to be guided by an overarching conservative drive, always choosing the smaller, duller, more achievable, less interesting path whenever possible. It also seems to have been savaged – or badly salvaged – in post-production, and the story we’re left with jumps and lurches in weird, uncomfortable ways. Ben disappears for most of the first act, only to be brought back for the power-spawning accident because, well, he’s supposed to be there. Reed sods off for a year of story time – in and of itself a baffling choice – while his friends are groomed to be deniable military assets. Von Doom – of course he survived! – comes back in full-on villain mode, wanting to destroy the world for reasons, his genocidal tantrum making absolutely no sense whatsoever, narratively or thematically.

Indeed, the film’s treatment of Von Doom is symptomatic of its overall problem with its material. Doctor Doom is an inescapably pulpy construction, the kind of Silver Age kitchen sink character whose absurd origins somehow add up to an incredibly enjoyable on-page experience. Here, he’s shorn of all his four-colour trappings and left an unmotivated enigma with vaguely-defined head-explodey powers, because to Trank’s sensibilities a boring character is preferable to an interesting but silly one.

Fantastic Four is a massive misfire. It may be the worst tentpole film of the year, although Terminator: Genisys certainly gives it a run for its money. It’s almost certainly a franchise killer, but it remains to be seen whether the long standing animosity between Fox and Marvel will allow the former to reach out to the latter, as Sony did when they fumbled The Amazing Spider-Man 2, and put the FF property back in the hands of creatives who aren’t afraid to embrace the fantastic.