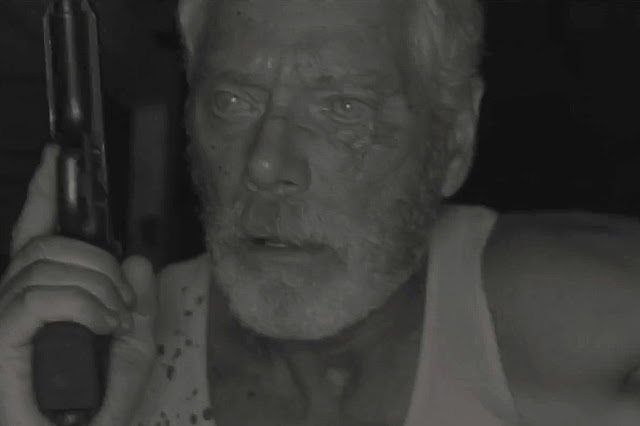 It takes a fair bit of maneuvering for Fede Alvarez’s reverse-home-invasion thriller* to put all its characters where they need to be for the mayhem to really kick in. It’s not plot maneuvering, per se: it’s easy enough to understand why our trio of young burglars – Rocky (Jane Levy), her boyfriend Money (Daniel Lovatto) and third wheel Alex (Dylan Minnette) would want to rob an ageing, blind Gulf war veteran, Norman Nordstrom (Stephen Lang) rumoured to have bulk cash stashed away in his house. They live in modern day Detroit, for crying out loud – that would be motive enough to want some seed money, without factoring in Rocky’s desire to whisk her little sister off to California, far from her despicable trailer trash mother.

No, the maneuvering is more conceptual, even perceptual; you have to buy into the idea that these successful burglars would choose to do this One Final Job in the dumbest and most doomed-to-failure way imaginable. We’re shown that these three**, Alex in particular, are careful in their larceny; using alarm codes from Alex’s father’s security company, never going armed, keeping their takings under $10,000 to minimise potential jail time, all that jazz. It all goes out the window when it comes time to relieve Lang’s loner of his riches, though, even though a – you’ll pardon the indulgence – blind man could see a better, safer way to do the deed.***

That the film still works, by and large, is down to Alvarez’ stylish, assured direction and a certain contract between viewer and film implicit in the horror genre; our three soon-to-be-regretful burglars enter the house at night because we want them to be in the dark and isolated when things go wrong, and we can accept a bit (or a lot, in this case) of fudging to set up the dominoes. What goes wrong, of course, is that Lang’s character is no cowering soft touch, but a driven, ruthless, supremely capable killer who is highly motivated to off these intruders with brutal efficiency and not just call the police. He’s also, being blind, not bothered by the dark and has the usually suite of movie-blind-people nigh-superhuman senses.

Don’t Breathe is basically a series of setpieces in which out protagonists have to deal with some new element of danger or complication while eluding Lang’s psycho, or his killer hound. Alvarez works the tension/release lever fairly constantly, so on a visceral level you’re pretty continuously engaged. It also helps that Levy makes for a charismatic hero, while Lang’s muscular, raspy turn as the villain means you’re never doubting that this guy is a threat – heck, he’s downright terrifying.

But that only works in the moment, and while the immediacy of stimulus and response is a big part of horror’s appeal, it helps if things don’t unravel the second you give them a moment’s thought. For a film so reliant on sound, Don’t Breathe could have benefited considerably from a more deliberate approach to sound design. We never really get a baseline understanding of what “quiet” or “loud” mean in the context of the filmic world; at one point characters might be literally too scared to breathe lest they attract Lang’s attention, while at another they’re stage-whispering their way through a conversation, heedless of their keen-eared stalker.

Still, it’s the late-stage reveal of what Nordstrom keeps in his basement that many will find more problematic. For one thing, it pushes our sympathies completely away from the blind man, and up until that point the film has done a pretty good job of keeping that particular pendulum swinging. For another, more relevant, thing, it introduces an element of sexualised violence into the mix, something that is absent up until that point – the squick factor is certainly raised for the third act. I’m by no means four square against sexual violence in horror; if the object of the exercise is to truly generate fear and discomfort in your audience, then you use the tools you have to the best of your ability and their fit to your aims, and sexual violence is certainly horrifying. It’s also a recurring theme throughout the history of the genre, and that’s even without recourse to the more obvious examples like Evil Dead (rape by tree) and The Last House on the Left (where to begin?) – after all, every vampire story is about rape. Still, this particular narrative leap is only half successful, and while it gains points in the ‘shock’ and ‘threat’ metrics, it drops a fair few in the ‘thematically justified’ and ‘plausible’ ranges.

For all that, Don’t Breathe works; at least, it works for me, and horror, like comedy can be a very personal thing. It’s a film that lives in the moment, and the experience of watching it on the big screen is a rewarding one. As a one-and-done B-grade thriller, it’s a very high-functioning example of the type – it just lacks the thoroughness of purpose that would allow it to to transcend its popcorner ambitions. And there’s nothing wrong with a good popcorner, but you shouldn’t go into this one expecting more.

*Reverse in that we’re not generally on the side of the invaders.
**Well, these two – Money is a dick and we’re supposed to dislike him. Fuck Money.
***Off the top of my head, they could start by going in during the day, where there would still be no witnesses (it’s established that Nordstrom lives in the last occupied home for blocks) and maybe go when both their victim and his freaking terrifying Rottweiler guard dog are out on an errand. They could have been done in ten minutes and on the next plane to LAX.