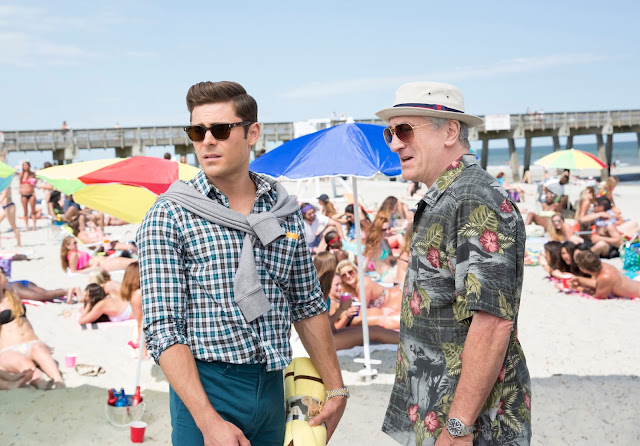 There was a time not too long ago that you could refer to Robert De Niro as America’s greatest living actor with a straight face, so in deference to that halcyon age let’s keep this short: Dirty Grandpa is a fucking war crime, and everyone involved needs to have a good, hard look in the mirror.

Picking the bones of similar, better films, Dirty Grandpa sees Zac Efron’s buttoned-down, soon-to-be married-lawyer, Jason,  forced by his sense of familial duty to escort his recently widowed grandfather, Dick,  (Bobby D N) down to Florida. The “twist” is that Grandpa just wants to party and get laid – an unusual attitude for a man whose wife just passed after a long battle with cancer. Preppy Jason has to deal with his hard-charging patriarch while juggling his bridezilla fiancee (Julianne Hough in a thankless role) and disapproving dad (Dermot Mulroney wondering where the years went).

The thematic arc is signposted from the get-go: Grandpa’s real agenda is to get Jason to loosen up and not get chained to an empty, creatively bankrupt life, and he does this by immersing the poor bastard in an empty, creatively bankrupt life, albeit one involving a lot more sex, drugs and booze. It also contains a lot more casual sexism, racism, and homophobia than Jason’s more conservative prior existence, but that’s positioned as all part of the package. Dick spends an inordinate amount of time insulting a gay, black character for no other reason than the guy is gay and black, and there’s no real coming back from that in the narrative – we’re just conditioned to think that Dick does what he does, and accept it, but none of his positive actions are enough to balance his basic ugliness.

There’s a precedent for this kind of thing. The similarly titled Johnny Knoxville joint Bad Grandpa is an obvious one, but Terry Zwigoff’s Bad Santa is also in the mix. Both have ostensibly odious protagonists who transgress normal social mores,but positioning such characters as sympathetic takes more dexterity than director Dan Mazer and writer John M. Philips can muster. Dirty Grandpa is an ugly, draining experience where the worst behaviours are canonised and whatever life lessons are glibly thrown in to justify the meanness are trite and don’t hold up to scrutiny.

There are occasional bright spots, mostly courtesy of comedy MVP Jason Mantzoukas as a laid back drug dealer, but for every moment of fun there’s a dozen cringe-worthy beats where normally talented people degrade themselves for what I hope was a decent paycheck. It is genuinely painful to see Parks And Recreation veteran Aubrey Plaza as a nymphomaniac party girl with designs on De Niro’s OAP party animal, although you have to admire her commitment.

Dirty Grandpa has been heralded as the worst movie of the year (bear in mind, it’s only February), but it’s not even the worst movie poor Efron’s released in the last 12 months (that’d be We Are Your Friends). It does, however, represent a new low point in De Niro’s career arc – and considering how many times we’ve excused his poor choices over the past couple of decades, that’s saying something. If you want to really make yourself sad, imagine if this was to be his last film – although, given the steady downward trajectory of his career, that might spare us from further abominations. In the meantime, spare yourself this one.