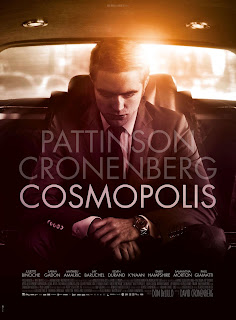 Crosstown Traffic
Directed by David Cronenberg
Starring Robert Pattinson, Paul Giamatti, Samantha Morton, Sarah Gaddon, Juliette Binoche, Jay Baruchel, Kevin Durand
Acclaimed Canadian director David Cronenberg used to be notorious for his exercises in transgressive body horror in films such as The Fly and Dead Ringers. However, there was always a steely intelligence inherent in even his most gore-soaked work, and it’s that quality that has come to the fore in his more recent efforts, such as A Dangerous Method and Eastern Promises. That trend continues with this, his adaptation of Don DeLillo’s 2003 novel.
In what or may or may not be the near future, young billionaire Eric Packer (yes, that Robert Pattinson) wants a haircut. A simple enough goal, but it involves traveling across a hostile Manhattan fraught with anti-capitalist protests and dealing with the heightened security and managed chaos that a Presidential visit brings. Ensconced in his high-tech limousine, Decker negotiates his way through a world he is almost entirely cut off from in much the same way he negotiates his relationships with his business underlings (including Samantha Morton, Juliette Binoche, and Jay Baruchel) and his recently-wed wife (Sarah Gaddon) – with icy intelligence, an almost solipsistic detachment, and a growing sense of self-loathing.
The film is set almost entirely within the confines of Packer’s limousine, and Cronenberg uses the framework of the journey to pontificate on all manner of matters, chiefly among them how our drive to systematise the world so often fails to account for the human element. Various characters pop in and out of Packer’s hermetically sealed world, bringing with them fresh ruminations to greater or lesser effect, but it gradually becomes clear that Packer himself is set on a crash course with oblivion, embracing the “credible threat” on his life that his bodyguard (the ubiquitous Kevin Durand) warns him against.
In Pattinson, Cronenberg has found the perfect vehicle for his post-millennial musings. With his angular, off-the-shelf, pretty-boy features and his cold, empty gaze, Pattinson doesn’t so much given a performance of alienation as live it. His Packer, with his looks, his intellect, his acumen, and his wealth, is an example of perfection; and perfection, Cronenberg says, is something not quite human. In his drive to find some kind of actual connection with the world, Packer is willing to – and more than capable of – destroying every element of his carefully constructed life, and it’s this that ultimately drives the narrative.
Reactions to Cosmopolis have been mixed, and that’s understandable; it’s an opaque film that demands close scrutiny, and its clinical stylings, deliberate pacing, and oblique narrative are not particularly welcoming. Make no mistake, though; this is Cronenberg at his most fascinating, and those with patience to tackle this conceptual puzzle box will be well rewarded for their efforts.
(First published in X-Press Issue 1330, 08/08/2012)