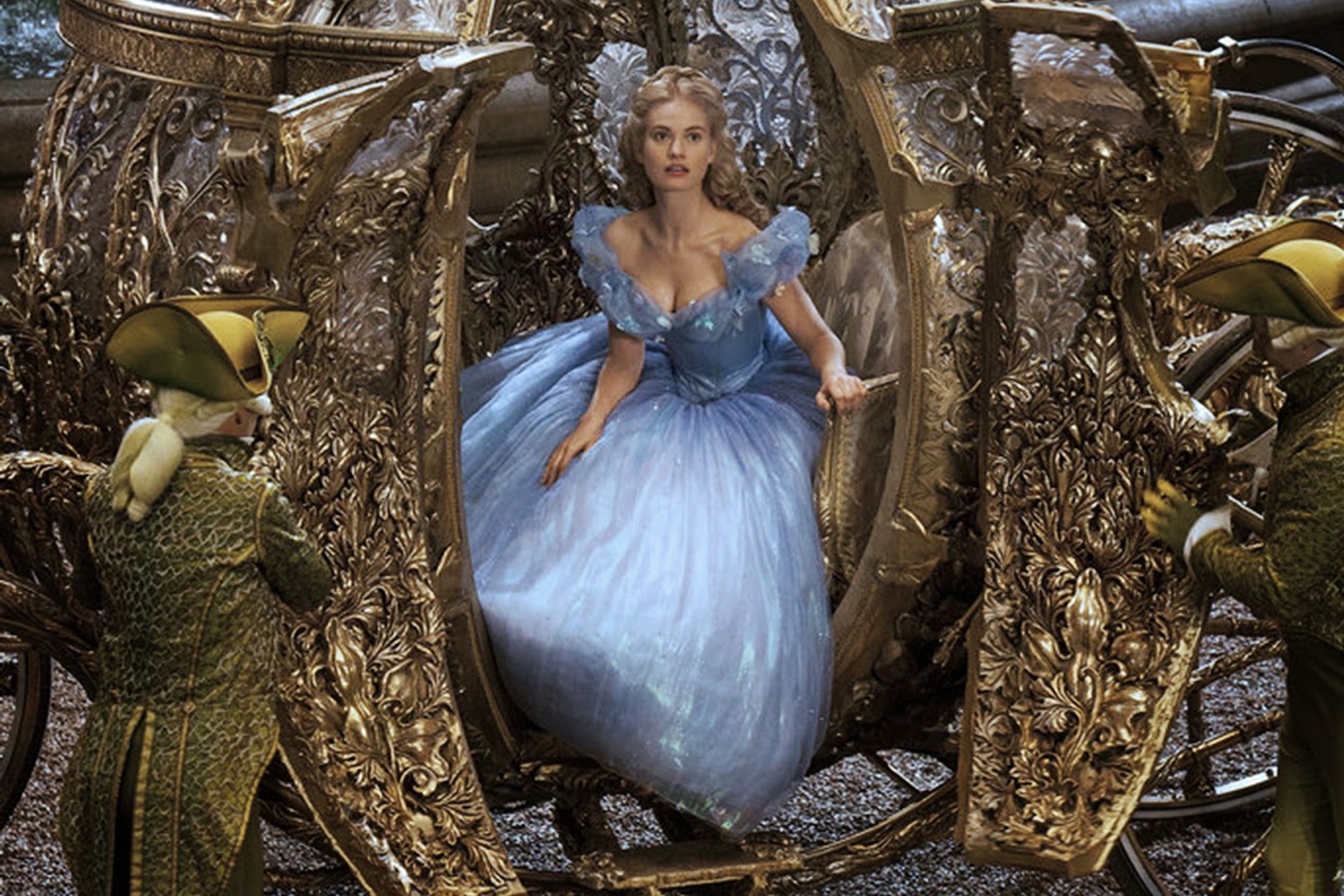 Directed by Kenneth Branagh
Starring Lily James, Richard Madden, Cate Blanchett, Helena Bonham Carter, Nonso Anozie, Stellan Skarsgaard, Derek Jacobi
You know this story.
Indeed, given the modern propensity for reworking old fairy tales as grit for the contemporary culture mill – think the television series Grimm and Once Upon A Time, or even Disney’s recent Sleeping Beauty sidequel, Maleficent– it’s kind of amazing how well you know this particular story: the 2015 Cinderella cleaves incredibly closely to its folktale roots in general and the 1950 Disney animated version in particular. It’s actually rather refreshing.
The radiant Lily James is (Cinder) Ella, the impossibly goodhearted girl who, on the death of her travelling merchant father, is left to the tender mercies of her evil stepmother (a wonderful Cate Blanchett, who brings nuance and complexity to what could have been a one not character) and her two shallow, vain stepsisters (Sophie McShera and Holliday Grainger), who treat her like a servant. Ella seems on be on course for a life of drudgery, her only friends the mice who live in the attic with her – except, of course, this is Cinderella, and so it follows that we’re in for a happily ever after, courtesy of Fairy Godmother Helena Bonham Carter and handsome Prince Kit (Richard Madden).
I imagine it would have been difficult to steer this film through the development process and have it arrive in theatres completely intact and free from revisionism and irony. Cinderella fully embraces its fairy tale nature, being set in a fantastically anachronistic middle-European kingdom whose chief nod to modernity is the multi-ethnic makeup of its populace. It’s an extension of and a tribute to the classical Disney aesthetic, a sumptuous, aspirational fantasy peopled by good princes, kindly kings, intelligent farm animals, smiling peasants and all the other trappings of a time and a place that never really existed, except in the imaginations of children.
The whole affair is beautifully realised by director Kenneth Branagh, who wields an invisible hand, letting the films design choices do the heavy lifting – there are no Thor-style Dutch angles to be found here. Costume designer Sandy Powell works wonders, drawing on influences from 18th century formalwear to the Jazz Age to give us a range of looks that feel classical but possess the vibrancy of the new and novel. Heck, Cinderella’s ball gown is worth the price of admission alone, and her entrance scene demonstrates beyond the shadow of a doubt the power and resonance of the Disney Princess myth.
Cinderella is a film you have to willfully embrace in order to enjoy; its charms are decidedly old-fashioned, to the point where even its pacing seems out of step with modern narrative sensibilities. It’s a big, beautiful, unironic take on an ages-old story that treats its subject material with reverence and respect, and I suspect you already know if you’ll be able to plug into that or not. For people who still believe in fairies, this latest telling of the tale is solid gold; leave your cynicism at home have a ball.
TRAVIS JOHNSON