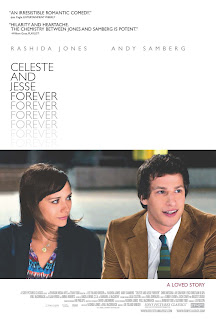 Modern Love
Directed by Lee Toland Krieger
Starring Rashida Jones, Andy Samberg, Elijah Wood, Emma Roberts, Ari Graynor, Eric Christian Olsen, Will McCormack
In this warm and funny film, director, Lee Toland Krieger, and co-writers, Rashida Jones and Will McCormack, breathe new life into the ailing rom-com by the simple expedient of using the form to grapple with actual contemporary relationship issues.
Market analyst, Celeste (Rashida Jones), and aspiring artist, Jesse (Andy Samberg), are pretty much inseparable, which is ironic, seeing as they’ve been officially separated for some time. Having met and married young, even Celeste’s decision to cut the aimless Jesse loose does little to put the kibosh on their BFF status. However, things begin to change when Jesse starts to move on with his life before Celeste does, which makes her wonder if her decision was too rash.
A more conventional film might put the spotlight on Jesse and his efforts to get his life in order and win back his soul mate (see: Judd Apatow), but C & J subverts things by putting the focus firmly on Celeste and her problems. Diving back into the dating pool leads to a series of dud encounters. The impending wedding of friends, Steve (Eric Christian Olsen) and Beth (Ari Graynor), serves to remind her of what she’s thrown away. The worst comes, though, when Jesse reveal that he’s having a baby with his new girlfriend, and is finally getting his act together for her sake, not Celeste’s.
The real strength of Celeste and Jesse Foreverlies in the way its characters are drawn as real people, not thin archetypes. Representations of wealth aside (even the unemployed Jesse never seems troubled by money woes), there’s a real ring of truth to the film’s cast of characters. These are people who drink and get stoned, who have inconsequential conversations and selfish impulses, whose interpersonal relationships are complex and nuanced. Even the odd figure that strays toward the stereotypical, such as Will McCormack’s laidback stoner, or Emma Roberts’ petulant teen pop star, are given shading and depth beyond what you might usually expect.
Of course, it’s really Jones’ show, and she’s given herself a role that plays to her strengths. Celeste is beautiful, articulate, and funny, but she’s also somewhat selfish, narcissistic, arrogant, and short-sighted; the fact that Jones manages to make all these traits explicit while still engendering our empathy is a mark of how good her performance is. Jones has made a strong impression in television shows such as The Officeand Parks and Recreation, as well as supporting roles in a number of high profile films.. Hopefully, the strength of her work here will see her given meatier work in the future.
All up, C & J is a sympathetic, poignant look at the ways in which relationships, for all our best intentions, sometimes simply fail to work, and anyone who likes their humour leavened with humanity should get something out of it.
(First published in X-Press Issue 1346 28/11/2012)