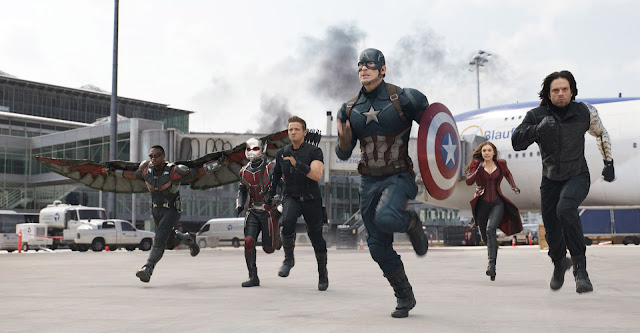 What’s amazing about the MCU is it feels sustainable. It’s a living document that evolves as it moves forward, and what changes are wrought feel tangible and lasting. My fondest wish is that they never reboot or recast any of their characters from here on in, but retire them when appropriate and legacy their superhero mantles – give me Bucky or the Falcon taking on the Captain America identity, or a Jane Foster Thor. It’s so much more interesting than retelling the origins again, or even taking the James Bond route.

When the credits roll on Captain America: Civil War, that doesn’t just feel like a possibility, but an urgent narrative imperative. This is the first of Marvel’s Phase Three films, and it insists that things are going to be very different from now on  – friendships are sundered, alliances torn apart, the status quo completely flipped. Even if it didn’t have some of the most exhilarating action setpieces in recent memory (thanks to the John Wick team of Chad Strahelski and David Leitch, who pulled second unit duty) it’d still be a must-see.

The conflict here is bifurcated, with two parallel but related story arcs powering the film. Following a disastrous mission in Nigeria to capture the villainous mercenary Crossbones (Frank Grillo), the UN decides that enough is enough – the world can’t have freelance superheroes running around enforcing their own brand of justice. The Avengers will be brought to heel by the Sokovia Accords (named for the location of the climactic action in Age Of Ultron) which will see the team reconfigured as a strikeforce answerable to a committee and only deployable by official decree. Tony “Iron Man” Stark (Robert Downey, Jr.) is all for it – he’s been hoping for a respite from responsibility for the last several movies. Steve “Captain America” Rogers (Chris Evans) isn’t so sure – he doesn’t want his power to help people being held in check, and the events of The Winter Soldier have left him wary of bureaucracy. That’s thread one.

Thread two comes into play when Cap’s old mate Bucky (Sebastian Stan), aka The Winter Soldier, seems to be responsible for a terrorist bombing that kills, among others, the King of Wakanda. Cap can’t believe his old friend would do it, or at least wants the chance to ask him some questions. Iron Man is tasked with bringing the ex-assassin in. The clash is inevitable.

It’s smart writing for a popcorner – screenwriters Christopher Markus and Stephen McFeely have given us two conflicts, one philosophical/political, the other deeply personal, and have balanced both sides of each. There’s no irrefutable reason to be either #teamironman or #teamcap – both men are right in their way, both are clinging too hard to what they see as core principles, and both cannot help but crash into each other, dragging what feels like three quarters of the Marvel Universe along with them.

It’s beautifully structured, too. This is a movie with room for Cap, Iron Man, War Machine (Don Cheadle), Falcon (Anthony Mackie), Black Widow (Scarlett Johansson), Ant Man (Paul Rudd), Vision (Paul Bettany), Scarlet Witch (Elizabeth Olsen), Hawkeye (Jeremy Renner) a full roster of supporting players – including William Hurt returning as The Incredible Hulk’s General Ross, now Secretary of State – plus two new characters, but it never feels overstuffed. Nor does it awkwardly try and plant too many seeds for future films, such as when Andy Serkis’s Klaw cropped up in Age Of Ultron; everything proceeds smoothly and dramatically, the story thumping along like a racehorse’s heart. Civil War doesn’t pull off any dizzying narrative reversals or formal experiments, but it is a huge pleasure just to watch the thing run.

Those two new characters are, of course, Black Panther (Chadwick Boseman) and, folded into MCU continuity at friggin’ last, Spider-Man (Tom Holland). The Panther, known to the world as T’Challa, prince of Wakanda, comes into the mix when his father is murdered and he marks Bucky for revenge. Boseman is terrific – regal, driven, projecting a keen intelligence, and he looks the business in the Black Panther costume, all athletic grace and barely-restrained ferocity.  A year ago I would have said a Black Panther solo movie was a hard, albeit not impossible sell – now the prospect is genuinely exciting.

And then there’s Spider-Man.

This is the third at-bat for the character, following the Raimi trilogy and the aborted Amazing Spider-Man series, and the well-trod ground of the origin is widely avoided. When we meet him, he’s been operating as Spider-Man for a few months, and he’s getting a handle on this whole vigilante hero thing. It’s nicely done, engendering the feeling that the Marvel Universe is always ticking over outside the frame of the films. Plus he’s a teenager – not Tobey-Maguire-playing-a-teenager, but a real young kid; he looks and acts 15, and the contrast between the wiry little guy and the ripped superhumans when he gets drawn into the big second-act Royal Rumble is fantastic. He brings two much-needed elements to the table: a genuine sense of childlike awe to help stave off sequel fatigue (Spidey fanboying out over heroes as he’s fighting them is adorable) and a clear-eyed, arguably naive morality that nonetheless works to remind us why we love these spandex soap operas. There’s a scene where he gets to run through a variation of the “…with great power…” monologue that just crushes it. In action he just is the Spider-Man of the comics; the costume is John Romita perfection, his agility and speed are incredible, and he keeps up a non-stop stream of patter, to the point where another character chides him for talking too much during a fight. His every onscreen moment is just a joy.

But there is darkness here, too; tonally, Civil War can turn on a dime, and it never lets us forget that there are not just lives but relationships at stake. When the film finally boils down to the inevitable one-on-one battle between Stark and Rogers it’s exciting, yeah, but it’s also damn near heartbreaking. We hit a point where everything is on the line, every punch counts, and these two guys, these two friends, simply will not, can not give each other quarter. It’s a really savage bit of business, at times quite upsetting to watch. It is honestly remarkable that, 14 movies in, we can hit this point where such a fight not only makes sense, it feels inevitable, both because of the plot machinations and the well-drawn characterisation of the principals. I don’t want to spend too much time throwing shade on Batman V Superman, but that conflict never felt earned or justified; it felt like a title card. This struggle feels organic, and it feels downright tragic.

I took a few days to ruminate on Civil War before writing my review because I didn’t want to throw around hyperbole I would later regret, but here it is anyway: The Dark Knight aside, this is the pinnacle of the modern superhero genre on screen. It’s everything we love about comics, folded skillfully into the modern action movie model. It’s not ashamed to be silly when its warranted (Vision in a cardigan and slacks is an image I will never shake), it’s not too proud to be sentimental when it’s needed, and it’s not afraid to grapple with some complex themes when it’s capable. It’s an absolute triumph, and it bodes extremely well for the future. Make Mine Marvel.