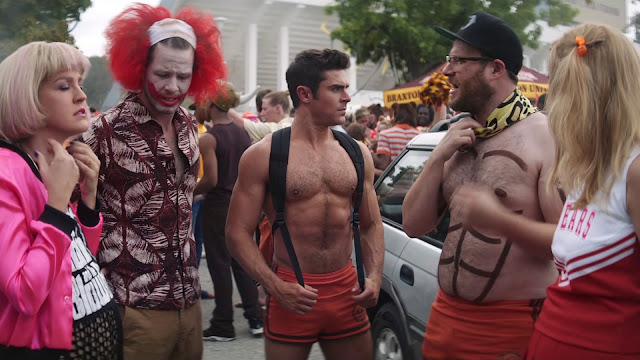 It’s a couple years down the track and Mac (Seth Rogen)and Kelly Radner (Rose Byrne), now with another kid on the way, are looking to sell their first home and move into something a bit more upmarket. Their plan depends on closing the sale of thier current house but oh no! – another group of rowdy college students has moved in next door – the girls of new sorority Kappa Nu, led by Shelby (Chloe Grace Moretz).

There’s a progressive element in Bad Neighbours 2 that is simultaneously admirable and unearned. Shelby’s motivation for starting her own sorority stems from her discovery that, in the Greek system, sororities can’t throw their own parties; they have to attend frat parties, a milieu Kiersey Clemons’ Beth describes as “rapey”. That’s actually pretty great, but the film’s social justice bonafides would hold more water if their female antagonists were characterised beyond “white girl”, “black girl”, and “fat funny girl” (that’d be Beanie Feldstein as Nora, who might otherwise be described here as “female Jonah Hill”). You’d be hard pressed to recall more than three things about these characters beyond physical descriptions, which is a damn shame; that actors the calibre of Moretz and Clemons – who was just great in Dope – can be so ill-served by the material they’re dealt. It’s actually weird how the film puts a feminist viewpoint front and centre and then fails to back it up through character and action. The rest of the Kappa Nus are just kind of a morass, with only rapper Awkwafina making much of an impression.

Oddly, the film fares better when dealing when the former Delta Psi bros. Dave Franco’s Pete is out of the closet and engaged to his boyfriend, while Jerrod Carmichael’s Garf admits to bi-curiosity during his time at college (“Sometimes you gotta suck a dick to realise you don’t wanna suck a dick.”). Even Zac Efron’s Teddy undergoes something of a journey of discovery; initially throwing his lot in with the Kappa Nus, he gets called on his instinctive sexism at every turn and comes to question many of his frat-culture assumptions. That’s all well and good, but it’s still a mystery why the actual Kappa Nus don’t get this much depth.

Still, the whole mess is pretty funny, with Byrne the comedy MVP (Ike Barinholtz is a close second). There’s an easy chemistry between the main players which hauls the general quality up to passable. The age divide that powered the narrative engine of the previous film worked surprisingly well, but by mixing in gender issues and failing to dramatise them well, Bad Neighbours 2 comes across as flabby and confused. It feels like a lot of stuff was left on the cutting room floor (Selena Gomez, widely touted in the advance publicity, gets maybe two short scenes) and it’d be interesting to see what was excised, because what we were left with is a generally amusing but sloppy comedy that can’t grapple with the themes it raises.