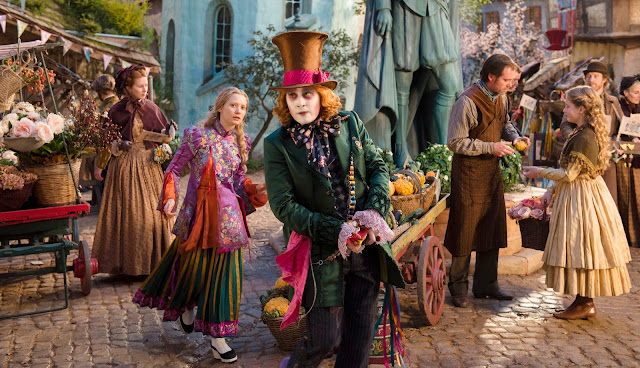 2010’s Tim Burton-directed Alice In Wonderland was a terrible film that went on to make a billion dollars world wide. This belated sequel, helmed by The Muppets director, James Bobin, is a middling film that tanked at the box office. There’s probably a lesson there, but I’m not sure what it is.

Set an unimportant number of years after the first film, Looking Glass sees Alice, now a fairly anachronistic 19th century sea captain, haring off back to “Underland” when real-world machinations could mean the loss of her beloved ship, The Wonder to the unctuous arsto, Lord Ascot (Leo Bill). Once she steps through a mirror and back into the absurdist fantasyland, she sees that trouble is afoot there, too; the Mad Hatter (Johnny Depp returning to his single most annoying character) is on his death bed due to grief over his parents, long dead. It falls to Alice to swipe a time machine/MacGuffin called the Chronosphere from the living embodiment of the concept of Time (Sacha Baron Cohen impersonating Werner Herzog) and go back in time to save the Hatter’s family from the Jabberwock (sadly not voiced by Christopher Lee this time, although you’ll feel a sad smile crawl across your face when you hear the late Alan Rickman’s voice coming out of Absalom the Caterpillar).

Alice Through the Looking Class is… okay. It could be that extremely low expectations owing to the awfulness of its progenitor mean that any bit of business that doesn’t completely screw the pooch comes across as pretty decent by comparison, or it could simply be that Looking Glass is a competently told, occasionally visually impressive (I love Time’s castle and his clockwork minions, and the vegetation-castle in the third act is great, all dank and dripping vines and rotting mulch jammed into piles of ancient grey stone and teetering stairways) fantasy adventure – sometimes that’s enough.

No one in their right mind really gives a fuck about the Hatter’s daddy issues (daddy is played by Rhys Ifans, by the way), but the the film does delve into the origins of the rivalry between the White (Anne Hathaway) and Red (Helene Bonham Carter) Queens to decent effect, lending the latter some pathos and the former some shade. Carter’s Red Queen is really the best thing about both these films so far, a pretty great combo of character design and performance, and the film jumps up a couple of notches whenever see’s on screen. Hathaway’s no slouch, either; her ethereal, pretentious take on the White Queen is incredibly mannered, yes, but it’s a great counterpoint to Carter’s bombast and volume. If they’re going to take this series further (and they shouldn’t, but you never know) a greater focus on these two would be welcome.

Alice Through the Looking Glass is low on surprises and low on fidelity to the Carroll canon, but it’s not the worst movie to come out this year by a long shot. It’s an improvement on Wonderland, in any case. With a bit of patience you’ll find enough here to keep you occupied for the running time, but its charms are definitely in the details – the whole is not the sum of its parts.