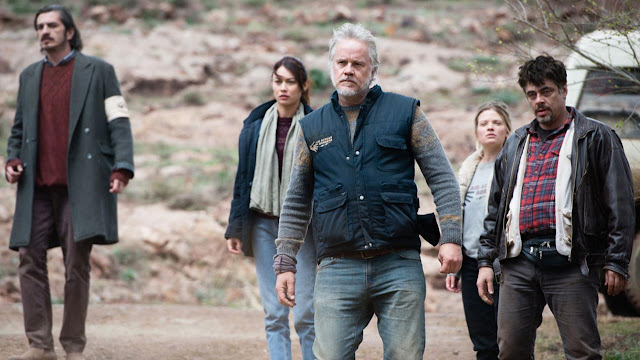 Robert Altman’s M*A*S*H is the obvious touchstone here. Working from  Paula Farias’s novel Dejarse Llover, Spanish director Fernando Leon de Arona presents us with a day in the life of a team of burned-out international aid workers set “somewhere in the Balkans.”

Mambru (Bencio del Toro) and his crew, which includes eccentric hippie B (Tim Robbins) and new blood Sophie (Melanie Thierry) can’t save the world, but maybe they can solve one little problem: getting a bloated corpse out of a village well before it becomes horribly contaminated. For that they need rope, which turns out to be in short supply in a winding-down war zone. their quest sets them up against local militants, avaricious civilians and UN bureaucracy. Surely Mambru can do this one little thing before he heads home?

It’s blackly funny stuff. Robbins is the comedy MVP here, but everyone gets in on the act, swapping one liners like sniper fire and bringing a palpable “zero fucks left to give” world weariness to the screen. But the film doesn’t let us forget the real life stakes of the scenario, personified by a young war orphan, Nikola (Eldar Residovic) who tags along for the ride.

De Arona’s deft script sets up his characters quickly and economically. Even though we only spend 24-odd hours with the team, we get a solid sense of who they are and how they relate to each other. There’s a sense of shared history that comes into focus when Katya (Olga Kurylenko), a former aid worker that Mambru had an affair with, crops up. Now working higher up the chain, she’s in the field to assess whether the aid mission should be shut down, putting extra pressure on the team to perform well. Of course, life, the universe and everything conspires to make that pretty much impossible.

A Perfect Day is a rock solid movie. Tackling heavy subject matter without getting mired in misery, it manages to be provocative, profound and laugh-out-loud funny, which is a big ask, It also benefits from a kick-ass soundtrack – anyone who goes hooning around a combat zone while blasting The Ramones instantly has my sympathies. Nimbly juggling comedy and pathos without letting either overpower the other, it’s a win across the board.

A Perfect Day is playing as part of the Lotterywest Festival Films Season from Tuesday, November 24, until Sunday, December 6. Go here for tickets and session times.