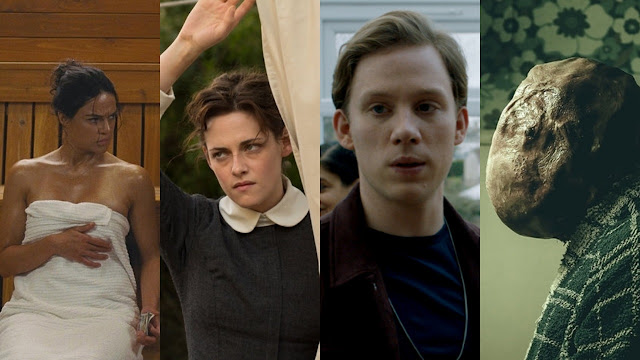 Hey team, Trav here.
In a weird and wonderful way, Celluloid and Whiskey is expanding. It’s still my baby and the place where I’ll put my reviews of stuff I want to talk about but haven’t been commissioned to write about elsewhere, but a few new voices are getting added to the mix.
You hopefully already noticed the excellent first review by the redoubtable Robin Pen, Perth-based font of cinematic knowledge and book-selling legend, and now we have the ridiculously talented Liam Dunn reporting in from the BFI London Film Festival. Enjoy!
So begins the 62nd London Film Festival, once again offering a veritable cornucopia of cinematic genres for the enthusiastic cinephile to sink their teeth into. Filmmakers from around the globe have descended on Leicester Square in London to screen, discuss and promote their latest offerings, many of which have already wowed audiences at Cannes, Venice and Toronto while others are making their World and European debuts.
Join me here at Celluloid & Whiskey throughout the next week for a daily diary of reviews of some of the most anticipated films and more than a few hidden gems from across the festival’s exhausting line up cinematic treats.
Widows (dir. Steve McQueen) 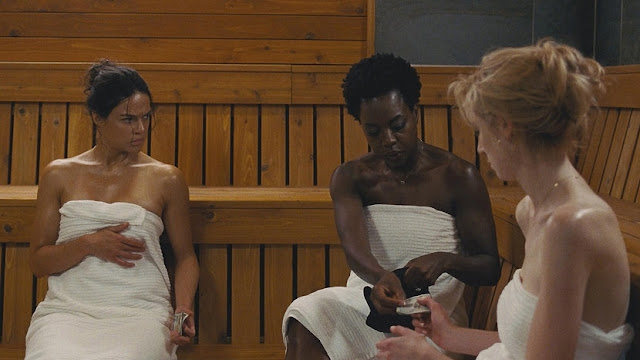 This year’s opening night film is one of the festival’s strongest gala screenings in many years. Steve McQueen’s Widows finds the 12 Years a Slave director in full thriller mode, adapting Linda LaPlante’s 1983 mini-series with the help of Gone Girl scribe Gillian Flynn.
Starring Viola Davis, Michelle Rodriquez, Elizabeth Debicki, Colin Farrell and Liam Neeson, the film portrays the struggles of three women who are widowed by their criminal husbands when a heist goes awry. When the targets of the robbery, (Atlanta’s Brian Tyree Henry and Get Out’s Daniel Kaluuya) come looking for their money, the titular widows decide to finish off their late husbands’ “one-last-job” hoping their actions will finally free themselves not just from the criminal underworld but from their own personal circumstances.
Steve McQueen has not only made a brilliant crime film, bringing his unique vision and eye for detail to the genre, he has made what could arguably be the most significant crime epic since Michael Mann’s Heat.  After a visceral opening scene, Widows expands into a sprawling (but never unfocused) Chicago-set saga about gender politics, race and political corruption, with all of these themes coming together to inform what could be the most important theme of all; the selfishness of legacy. The men die and leave a giant mess that their widows now have to clean up, their justification for their life of crime, that they are “doing it for the family”, is exposed as the egotism that it really is. Meanwhile, on the other side of the coin, Colin Farrell’s corrupt politician is chastised by his father (Robert Duvall) who tells him politics isn’t about changing anything, but just about survival, and that is the way it has always been.
Widows casts a wide net of characters, plot threads and themes but then over the course of two hours slowly reels it in, connecting it all through superb performances (Viola Davis is reliably intense) and a layered script bolstered by McQueen’s fascination with showing people, and bodies, in crisis. Some may find the pace a little slow going at first and the script deploys a few well-worn tropes in the third act, but the twists and turns come with the genre territory and McQueen and Flynn expertly juggle the demands of the crime film with the larger themes at play. Widows is truly a 21stcentury crime epic with a sharp feminist edge, that not only feels current but entirely relevant to our times.
Lizzie (dir. Craig William Macneill) 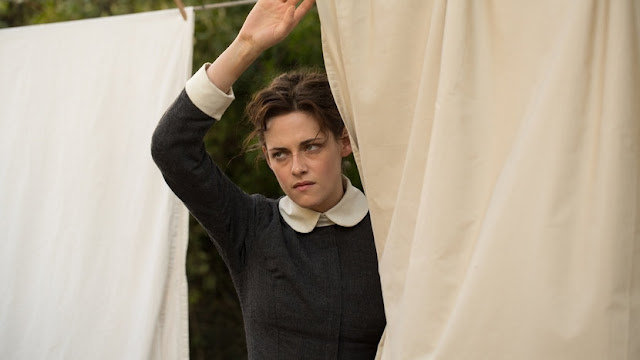 There have been countless adaptations of the infamous Lizzie Borden case throughout the years, following her charge and subsequent acquittal over the vicious axe-murders of her father and stepmother. Perhaps, though, there has never been one as sympathetic to her as Craig William Macneill’s Lizzie, which casts the titular anti-hero (?) as less the cold-blooded killer, and more a victim of a society that wants to silence and oppress her.
Lizzie Borden (the always terrific Chloe Sevigny) lives a comfortable life in late-19thCentury Massachusetts thanks to their father Andrew’s (Jamey Sheridan) wealth but their relationship is strained due to Lizzie’s unwillingness to play the dutiful ingénue. When their new maid Bridget (Kristen Stewart) arrives she falls prey to Andrew’s lust at the same time as she and Lizzie realise they have feelings for one another. Events escalate from until that fateful day finally arrives and the axe starts swinging.
Whether you are familiar with the details of the story or only know about the grisly outcome, Macneill and screenwriter Bryce Cass extrapolate upon factual accounts of the case to dramatise the events in a more feminist context. Both Lizzie and Bridget are victims of their circumstance in a time of great gender and social inequality. The murders that frame the story then become not ones of opportunity or bloodlust but of rising up against a tyranny they could no longer accept.
The acting and Macneill’s direction lean toward the understated end of the spectrum, using a sparse soundtrack and amplifying every footfall and creak of the old Borden house to fill the space between the pregnant pauses and delicate framing, using extreme close ups of the women’s faces that barely contain their grief and rage. Great performances bolster this very worthy re-interpretation of a well-known event, even though the film doesn’t quite rise up to meet its reputation.
Happy New Year, Colin Burstead (dir. Ben Wheatley) 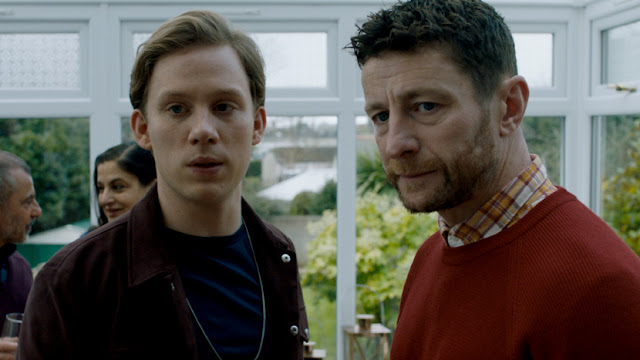 After the back to back tours de force of High Rise (2015) and Free Fire (2016) one cannot blame director Ben Wheatley for wanting to scale things down and return to his low-budget roots for his most recent film, which is screening in the Official Competition in this year’s festival.
Happy New Year, Colin Burstead takes place during the New Year’s Eve party of the Burstead family, headed up by self-appointed patriarch Colin (Neil Maskell). The night is already fraught with tension as each family member brings their own baggage (physical and emotional) to the party but the night reaches a fever pitch when Colin’s estranged brother David (Sam Riley) arrives to throw the entire group into turmoil.
Filmed in ten days and edited on the fly using a script bolstered by the improvisations of its ensemble cast, Wheatley’s new film still carries the director’s trademark pitch black sense of humour but in a much more low-key setting. Gone are the mega-stars and the ultra-violence of his previous efforts but what remains is an acerbic wit and an ability to effectively corral actors into scenes of orchestrated conflict, only this time of the family variety. Wheatley also can’t resist sprinkling a little English folk flavour into the story, quickly casting the drama as a modern version of a Shakespearean-era chamber piece, complete with appropriate folk music by Clint Mansell which adds an extra dimension to the material beyond its familiar dysfunctional family premise.
Fans of Ben Wheatley will find much to enjoy with Happy New Year, Colin Burstead but will perhaps be left a little wanting when compared to his previous efforts. Those coming in cold will find a very dark, but ultimately hopeful black comedy with much to relate to their own family experiences, in a very well-acted ensemble piece from a master filmmaker stripping things back and trying something new.
All the Gods in the Sky (dir. Quarxx) 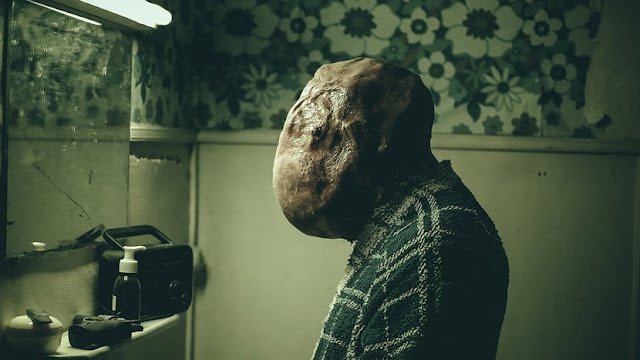 Extreme French cinema had its heyday in the late-nineties to mid-noughties and brought to the fore a new breed of filmmakers (such as Alexandre Aja and Xavier Gens) who weren’t afraid to push buttons and boundaries in the service of their stories. The sub-genre dubbed the New French Extremity has waned in the intervening years but it hasn’t stopped some up and coming filmmakers going to similar lengths to shock and disturb audiences.
Simon (Jean-Luc Couchard) is a sheet metal worker who is also full time carer for his sister Estelle (Melanie Gaydos) who became disabled after a horrific childhood accident. Simon believes he is receiving signals from aliens through the radio telling him to prepare himself and his sister for their arrival. But are the aliens real or just a manifestation of Simon’s grief over Estelle’s accident for which he feels responsible?
All the Gods in the Sky takes some of the elements of the New French Extremity to tell a surreal drama about grief and mental illness but cannot transcend its genre in any meaningful way, coming off as slowly paced, gratuitously ugly misery porn with some vague science fiction allusions. Rather than place the audience in the experience of Simon, or even his sister Estelle, writer/director Quarxx positions the film at a step removed which makes the whole enterprise feel woefully voyeuristic. Events just seem to happen without any willingness to sit inside any emotional state for too long before moving on to the next scene of gloomy wretchedness.
The performances are fine and model Melanie Gaydos is the brightest light of the whole film, providing us with the most emotional resonance as Estelle, but only when the film lets her provide some characterisation when she isn’t lying paralysed in bed being abused. Quarxx offers up some expressive imagery but on the whole fails in justifying why we’re witnessing the whole ordeal, none of it quite comes together into a satisfying whole. All the Gods in the Sky is Transgressive (with a capital “T”) and may invite some fascinating analysis but as a film it struggles to make an impact beyond its obnoxious superficiality.
LIAM DUNN