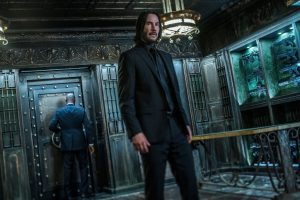 Following the events of John Wick Chapter 2, the titular black-suited killing machine finds himself on the run from legions of assassins, a $14m bounty on his head. While Wick fights to make amends for his crimes (he killed someone at the assassin-sanctuary hotel The Continental – a big no-no in the franchise’s baroque mythology) – and just fights in general – the shadowy High Table, the ruling council of the series’ shadowy underworld, sends an “Adjudicator” (Asia Kate Dillon) to punish his former allies for aiding him. And we proceed from there.

John Wick Chapter 3: Parabellum (and I think we’ll just go with JW3 from here on in) feels less like a movie in and of itself than an episode in a long-running television series. Not that you can’t plug into the immediate narrative action without too much trouble – it’s a chase movie, after all, and the mechanics are easy to grasp – but both the beginning and the end of the film as it stands are pretty meaningless without being connected to the broader franchise.

Which is to say that JW3 is most assuredly not the concluding chapter of a trilogy, but rather a placeholder episode leading onto what will hopefully be a more concrete and cathartic chapter. While immediate threats here are dealt with satisfactorily. the wider narrative elements in play are just moved a few spaces along the board, with a big, dangling sequel hook left in place of a denouement. It’s all a bit The Empire Strikes Back.

Still, The Empire Strikes Back is a good movie, and so is John Wick 3. Screenwriter and Wick creator Derek Kolstadt (working with three co-writers here, and really, is that entirely necessary?) and director Chad Stahelski (who co-directed the first Wick with David Leitch, and called the shots on the next two, while Leitch directed Atomic Blonde and Deadpool 2) know what they’re about, crafting a gothic alt-universe whose main function is to generate plot drivers to support the best action sequences currently being filmed.

JW3 has copped some stick for having too much action, and the only possible response to that is to accuse such critics of being fucking spoiled. I’m an old man now, and I hearken from a time when a bog-standard action movie supported perhaps two stand-out action beats. JW3 feels like it has about 30, and they’re all distinctive, intricately choreographed, insanely brutal, and hellaciously exciting. If you want a knife-throwing duel, you’ve got it. Motorbike jousting? Check. Horse vs. motorbikes? Done, son. Guns vs. attack dogs, ninja vs Belarus Mafiya, the guys from The Raid (Yayan Ruhian and Cecep Arif Rahman) acting as henchmen to the Iron Chef Chairman himself, Mark Dacascos? Yes, yes, and yes. It is an action connoisseur’s delight.

And that is key to the success of this franchise: the people making these films love action movies. Indeed, the production of the first film is rooted in Leitch and Stahelski’s dissatisfaction, as stunt professionals, with the way action was predominantly being shot and cut at the time. They decided to fix that, and the results speak for themselves.

The Wick flicks are steeped in an appreciation of action not just as an element, or a process, but as a genre, with each film taking pains to reference and respect various traditions and subgenres. If the first was very much a NYC-by-John-Woo stripped-down revenger, the second was for all intents and purposes a romanzo criminale, drawing on European crime and exploitation tropes, and this third go-round looks to both the West and the East for inspirado.

There are Western motifs in play: John uses a couple of Comanche trick-riding techniques in the bike vs. horse sequence, while a scene where he has to assemble a revolver from parts is a direct nod to The Good, the Bad, and the Ugly, and the score by Tyler Bates and Joel J. Richard occasionally homages Ennio Morricone.

Elsewhere, we get more Asian flavour to our mayhem, with Dacascos’s sushi chef/hired killer, Zero, heading a small army of essentially ninja, who dispatch their enemies with stealth and a variety of bladed weapons. The Near East gets a look-in as the film alludes to the possible historical origins of the term “assassin” in the Persian hashishin of antiquity, even though the plot actually takes us to Casablanca in North Africa (Hollywood geography at its finest). Still, at least we get Halle Berry as a henna-ed killer who uses trained attack dogs as weapons, and that’s worth a little map-fudging.

“Fudging” is how the John Wick Universe survives, after all. The whole thing is like Wile E. Coyote standing on a dust cloud and not falling until he looks down – the second you start to acknowledge the impossibility of the situation, you’re screwed. The vague semblance of actual governmental control and oversight hinted at by the inclusion of John’s harness bull mate in the first film is completely absent now – assassins slaughter each other with impunity, dropping victims in public places as civilians wander blithely by, oblivious to the clandestine war that rages around them. This is deliberate, of course – anyone yelping about “realism” is missing the point entirely. We’re viewing this thing through a proscenium arch, and our complicity in constructing its universe isn’t just assumed, it’s absolutely vital. If you can’t hold up your end of the bargain that’s your problem, not the film’s.

If you can do your bit, though, JW3 offers riches. Like the theatrical heritage alluded to, the film trucks in big themes and grand emotional arcs. The whole thing is driven by John’s deathless emotional debt to his deceased wife, and from that seemingly simple bit of eye-for-an-eye business (remember, this whole thing happens because of Alfie Allen killing John’s dog two movies ago) has been wrought a whole moral universe predicated on duty, honour, fealty, and loyalty: personal, professional, and societal. The film’s expressionistic, designed-to-death visual palette is beautiful to look at but, like the early German films that clearly inform it, also reinforces the themes and emotions at work in any given scene. Nothing is accidental here – everything works to support the story, and the story is told through the action. It’s remarkable.

The film smartly uses a top-notch cast to carry this whole thing, knowing that it’ll need stellar performers to buoy a story whose strengths lie in areas other than dialogue and the subtleties of personal interplay (that’s a feature, not a bug, though). So we get returning campaigners McShane, Reddick, and Fishburne; plus Dacascos, proving that he has been woefully underappreciated up til this point; the aforementioned Halle Berry thoroughly and knowingly inverting the Bondian “doomed old flame” trope; Angelica Huston as a puzzle piece from John’s personal past; plus Jason Mantzoukas (cast for his beard), Saïd Taghmaoui, Jerome Flynn, and more. Everyone seems to know what the deal is here, delivering bombastic, declarative dialogue with the exact combo of charisma, seriousness, and self-awareness necessary to carry their scenes.

JW3‘s failing, as mentioned above, is that it’s an episode, not a movie. Indeed, it’s hard to imagine what these films are building to in terms of climax and catharsis – we could always follow John on an overarching quest to bring down the entire High Table (and the eventual revelation of who comprises that ruling cabal will no doubt provide many more exciting casting possibilities), but so much of the enjoyment of these films is in the twisty and labyrinthine secret society in which they’re set that tearing it all down will probably prove disappointing. The end goal remains nebulous, and while good old-fashioned revenge always remains a possibility, the increasing thematic complexity of the films means that returning to that fairly undeveloped driver would be a disservice.

Still, these are the greatest American action movies of their day. Only the Fast and the Furious series is comparable, and its telling that David Leitch is directing the next installment of that franchise. Maybe there’s no end goal – maybe (almost certainly) they’re just making these up as though go along. As long as we don’t look down, we’ll be fine. Make a dozen more – I’m here for it.