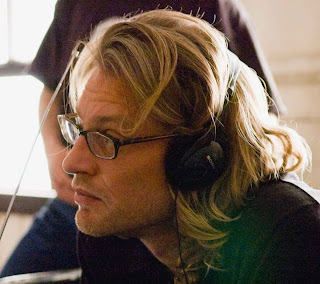 Dominik’s Trade
Australian director Andrew Dominik doesn’t mean to keep making crime movies, honest. It’s just the way things keep turning out.
“It hasn’t been deliberate,” he swears. “I have tried to get other movies about other subjects going, but they’re the ones that I’ve managed to get going. I don’t know, mate. Certainly, I love crime films. Any aberrant behaviour is interesting to me; people who are going to transgress the rules, but I’m hoping to be able to not make one. Next one, hopefully.”
Still, we shouldn’t complain. The underworld flicks that Dominik has helmed – Chopper, The Assassination of Jesse James by the Coward Robert Ford, and now Killing Them Softly – are all exemplary pieces of cinema; dark, violent, complex, and blackly humorous. It’s the latter that concerns us now, being an adaptation of the brisk and uncompromising novel Cogan’s Trade by George V. Higgins.
“I stumbled across it through The Friends of Eddie Coyle,” Dominik recalls, referring to the only other film adaptation of Higgins’s work, a ’70s thriller starring Robert Mitchum. “That’s how I first became aware of Higgins. I just sought out his books; I found a bunch of them through second-hand booksellers, and this was the third one, I think, to come through the mail. the initial attraction was the characters, you know? They just seemed really well drawn, and they were probably people that he knew.”
Indeed, Higgins, a Boston-based lawyer and journalist who worked both prosecution and defence over the course of his career, had a knack for grimy verisimilitude. But what really appealed to Dominik about the book – wherein the criminal community is thrown into disarray after a mob-protected card game is robbed, and enforcer Jackie Cogan (Brad Pitt in the film, making his second collaboration with Dominik after Jesse James) is brought in to set things right – was the way in which the scenario mirrored what he saw as certain elemental truths about the recent downturn in global economics.
“It just seemed to be a microcosm,” he explains. “A distilled version of what was happening in the larger world at the time. You’ve got this economy that’s supported by gambling, you’ve got these dumb guys that are able to collapse it because they failed to regulate it the last time it happened, and in cleaning up they have to deal with the actual problem, plus the perception of the problem. It had reflections of the GFC. At that point, it seemed like something worth getting into. The movie became a bit more cartoonish, obviously, once a more satirical element was introduced, basically to make a movie about economic collapse. It’s a movie about a collapsed economy.”
In fact, Dominik views all crime movies as being essentially about economics; no matter what the narrative trappings, he contends that, at core, every gangster movie revolves around the quest for the almighty dollar.
“I think crime movies are about capitalism,” he says. “In that crime is the most unadorned form of the Darwinian economic idea. I guess the reason that crime films appeal is that it’s the genre where it’s perfectly acceptable for characters to care about nothing but money, and maybe that’s why they’re so successful in America, where so many people have their eye on the bottom line.”
To that end, Dominik cast two instantly recognisable figures in supporting roles: Ray “Goodfellas” Liotta as hapless mobster Markie Trattman, and James “The Sopranos” Gandolfini as washed-up assassin New York Mickey, to cement the film’s ties with the existing crime oeuvre.

“The film kind of wears its agenda on its sleeve,” he tells us. “So the idea of casting people who are instantly recognizable from gangster films can work in your favour, in that respect – especially if they’re gonna play against type.”