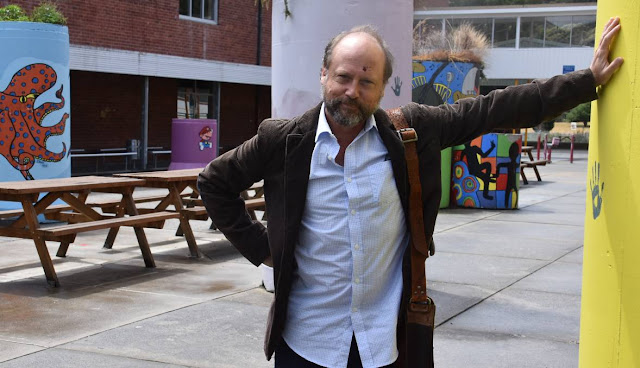 For anyone whose taken a day job to make ends meet only to look around a decade later wondering what the fuck happened, Book Week is a must. So… almost every artist, writer, and muso.

It’s the middle category in which our protagonist, Nick Cutler (Alan Dukes), fits. Eight years ago he won himself a little literary notoriety with his first book, and then torpedoed it by trying to live the myth of the boozing, lecherous Man of Letters.

Now unhappily toiling away at a Blue Mountains high school, Nick has a sliver of chance at getting out of his rut: a pair of preening literary tastemakers (Toby Schmitz and Khan Chittenden) like the look of his latest effort, a pretty cynical stab at supernatural pulp fiction, and it could be his way out from in front of the blackboard.

The problem is that our hero is a self-destructive jerk: a drunk, a womaniser, intellectually arrogant, pretentious, petty, and jealous. Convinced he’s above what he sees as the reduced circumstances he finds himself in, he alienates pretty much everyone he’s crossed paths with, including his fellow teacher and sort-of girlfriend, Lee (Susan Prior); gifted student Melanie (rose Riley, whose own literary talents provoke envy; and the beleaguered school principal (Tiriel Mora), who just wants to shoulder his way through Book Week (a kind of traditional primary school literary festival, non-Australians) without the wheels coming off.

Made for around $100K, Book Week nonetheless comes off as a more polished production than its limited budget might suggest, with writer, director, and producer Heath Davis making the most of his mountain town locations, his talented cast, and the firm understanding that people in crisis are always interesting.

And our antihero is always in crisis, and it’s always of his own making. Nick excels in turning opportunities into liabilities, whether its mentoring a student teacher (he sleeps with her), moving on to the next stage of his relationship with Lee (his instinct is to cut and run), or even steer clear of his favourite strip club in the lead up ti signing a publishing deal (the thought never crosses his mind, really). He is the architect of his own misery, and his fatal flaw is that he refuses to take responsibility for his situation.

It would be easy to make Nick thoroughly unlikable. Indeed, it takes a deft hand to keep our sympathies with him as he navigates his septimana horribilis, but David and Dukes are up to the task. If there’s any justice this will prove to be a breakout role for Dukes, who’s been a familiar face in Australian film and TV since the late ’90s, generally in supporting roles. You can all but see him sink his teeth into the role of Nick here, relishing the opportunity to play a complex, erudite, flawed mess of a character, and he really knocks it out of the park.

Book Week is a great little film, and that “little” is not disparaging – it sets its boundaries carefully and fills them with character, incident, and mordant humour, resulting in a comedy that’s blacker than most, but still hopeful in the final analysis. After a limited theatrical season it’s now on home release through all the usual channels, and well worth giving a spin.