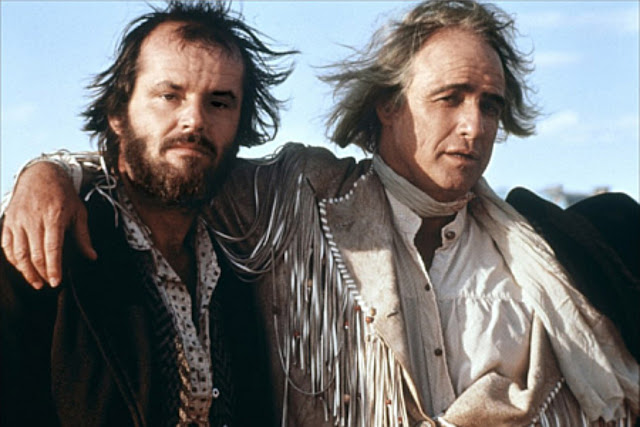 Released at the tail end of the revisionist Western cycle in 1976, Arthur Penn’s The Missouri Breaks is an odd duck of a film, but one worth investigating nonetheless.

Jack Nicholson stars as rustler Tom Logan, who sets his sights on cattle baron David Braxton (John McLiam) after the latter has one of Logan’s friends lynched. Tom and his gang (which includes Randy Quaid and Harry Dean Stanton) buy a small parcel of land abutting Braxton’s ranch, intending to use it as a waypoint in their plan to steal Braxton’s stock, with Logan masquerading as a farmer to provide cover. Meanwhile, Braxton contracts Robert E Lee Clayton (Marlon Brando), an eccentric “regulator” (read: freelance assassin) to put an end to the rustling – and the rustlers. A violent showdown is inevitable.

So, let’s talk about Marlon Brando. In a film filled with fine, naturalistic performances, including an excellent early career turn by Nicholson, Brando is in full and fancy flight as Clayton. It seems clear in retrospect that this is one of those pictures where nobody felt they could say no to Brando and pretty much let him invent his character out of whole cloth. He invests  Clayton with a bizarre accent that sits somewhere between Irish and Welsh and has him carry a weird hand weapon (Wikipedia describes it as a cross between a mace and a harpoon) that he uses in one memorable scene to dispatch poor old Harry Dean. In his quest to eliminate Logan’s gang he dons a number of disguises, at one point pretending to be a Catholic priest, at another dressing up as an old woman to carry out a murder. Brando’s work is so weird and wonderful here that it threatens to unbalance the whole affair, derailing the film even as it captivates the viewer.

That it doesn’t is down to some masterful direction by Penn, who uses Brando as a kind of bright focal point around which to array the rest of his dusty, drab and violent story. Like many of the Westerns of the period, The Missouri Breaks isn’t about good versus evil or civilisation versus savagery, but rather conflicting business interests that both straddle the line of the law. In the end, there’s not too much to differentiate Logan and Braxton apart from their level of wealth and social power – they’re just competing for finite resources (including Braxton’s daughter, Jane, played by Kathleen Lloyd).

Sedately paced, acutely observed, and peppered with moments of extreme violence, The Missouri Breaks might have faded into the background were it not for Brando;s famously strange turn here. We’re lucky it didn’t – it’s a fine little film, a minor classic of the genre.