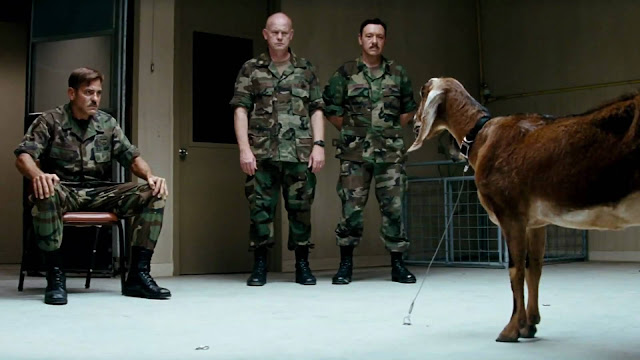 Directed by Grant Heslov
Starring Ewan McGregor, George Clooney, Jeff Bridges, Kevin Spacey
Jon Ronson’s 2004 book, The Men Who Stare at Goats is far from unfilmable – it recounts the details of the US military’s investigations into psychic warfare, for crying out loud – but it is a piece of journalism, not a narrative, so to work as a non-documentary feature film many liberties have had to be taken. So we get Ewan McGregor’s Bob Wilton standing in for Ronson, with a broken marriage backstory propelling him to Iraq as a war correspondent. There he has a chance encounter with Lyn Cassady (George Clooney), who regales him with tales of soldier-cum-guru Bill Django (Jeff Bridges) and the US Army’s pot-smoking, transcendental meditating, primal-screaming attempt at superhuman black ops, the New Earth Army. As he accompanies Lyn on a mysterious mission deep into Iraq, Wilton learns the strange and allegedly true story of the military-industrial complex’s foray into the world of astral projection, telepathy, telekinesis and remote viewing, all the while developing his own spiritual potential.
Clearly the plot is the weakest element in play here, serving only as a framework to recount the history of the New Earth Army. It’s arguable that this would have been better as a straight documentary, but doing that would have robbed us of the best part of the film: the performances. McGregor is amiable enough as our point-of-view character, but is given little to do except bear witness to the strange goings-on.  Bridges is typically solid, running through the Zen stoner schtick that served him so well in The Big Lebowski. Kevin Spacey steals a few scenes as “dark Jedi” psychic soldier Larry Hooper, crafting a serviceable villain with a few sneers and deadpan line deliveries, and Stephen Root, Robert Patrick and Stephen Lang all crop up in bit parts. Lang in particular is surprisingly funny in his few scenes, and after this, Avatar and Public Enemies, is fast becoming one of my favourite character actors.
Clooney’s the standout, though. His character has the strongest arc. We meet him as a burn-out, bored with the world and filled with self-loathing, then see in flashback his transformation from a straight laced military man into a whole human being (not to mention “Jedi” psychic) under Django’s tutelage. The central question for most of the film is how Cassady went downhill after his experiences in the New Earth Army, and it is this storyline that engages, not Wilton’s investigation. Clooney’s performance reminds us why he’s one of the few actors working that we still refer to as a movie star; he’s riotously funny but nuanced, committed to the lunacy of the central premise, but still able to project his character’s inner journey. As an audience, we’re lucky he sees the value in material like these; it’s rare for an actor of his calibre to participate in such offbeat, low-budget projects.
Director Heslov keeps the proceedings suitably light – this is a comedy, not an espionage thriller. Tonally, it echoes a Coen Brothers farce, and Heslov uses his actors to generate most of the laughs. Thematically, this is at heart a joyous film that celebrates humanity. There’s a feel-good new age vibe throughout the piece, and it is for the most part presented without irony.  Although there are moments of darkness – the suicide of a New Earth Army recruit springs immediately to mind – they are few and far between. The central message here is that human potential and goodwill will always triumph over evil, and even the might of the military-industrial complex can be laid low by nothing more than a couple of determined dropouts and a small but potent quantity of LSD.
What we have here is essentially a cynicism barometer, and what you get out of the film depends largely on what you bring to it. It is by no means a great film, but it is a fun one, with an intriguing premise, an engaging cast, and a warm but wry heart. If you can swallow the new age message without gagging, you’ll have fun with The Men Who Stare at Goats, but the more materialist may want to skip this one.
TRAVIS JOHNSON