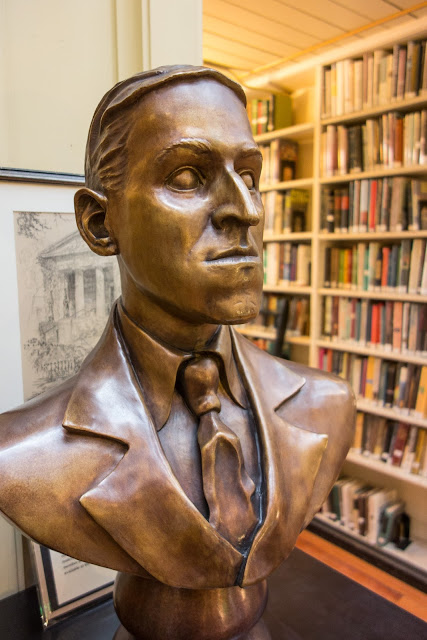 So, as I write this, it’s the 125th birthday of horror icon H.P. Lovecraft, who was born in Providence, Rhode Island on August 20, 1890. He also died in Providence in 1937 and, apart from a couple of ill-fated years in New York City, never ranged too far from the place, so Lovecraft and Providence are firmly linked in the minds of the Lovecraft fanbase.

Which goes a long way to explaining why Bryan Moore of Arkham Studios ran a Kickstarter campaign to fund the making of a life size bronze bust of Lovecraft. It was wildly successful – the horror, literary and geek communities got right on it, busting the funding goal in two days flat, and eventually raising $58,023 – and now Lovecraft’s visage sits in the Providence Athenaeum, an independent, member-supported library.

So, what’s all this to do with Woody Allen?

Well, Allen’s latest film, Irrational Man, is largely set in Providence and nearby Newport. There’s a scene where two characters- if memory serves, it’s Joaquin Phoenix’s Professor Abe Lucas and Emma Stone’s Jill Pollard – are having a typically Allen-esque conversation in an unidentified library which, on reflection, is most certainly the Athenaeum, because Lovecraft’s burnished visage is clearly visible in the background. It really took me out of the movie, actually; once I clocked it, I kept ruminating on the possible significance of its appearance, and following Allen’s fun but slight murder comedy became a secondary concern.

It’s a fun little Easter egg for those folks that dwell in the narrow sliver of overlap between Allen fans and Lovecraft fans, though. I can’t imagine a guy as well read as Woody Allen would be unaware of Lovecraft’s literary legacy, and the bust’s appearance in this story of intellectuals grappling with ennui, despair and murderous insanity is certainly a deliberate wink rather than a happy accident.