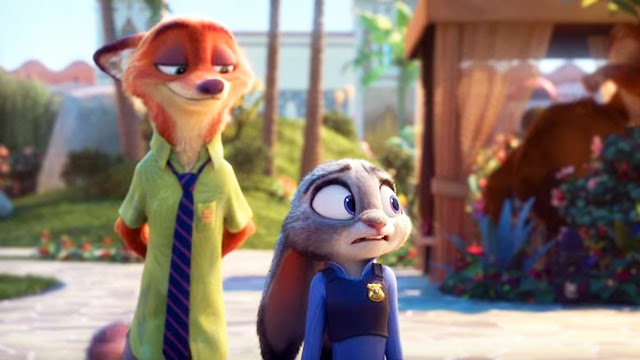 We are big on world building these days.

Back in the day no explanation was needed as to why Mickey Mouse, Donald Duck and Goofy (a dog, but do see Stand By Me for some deeper analysis) were all hanging out together, but these days some kind of quasi-plausible framework is necessary – blame superhero movies. Thus, Zootopia, Disney’s new talking animal family blockbuster, gets a somewhat complicated backstory, leading into a socially complicated present, wherein a fairly complicated story unfolds – or at least one a few rungs up the maturity ladder from Disney’s usual family fare.

Zootopia is a city where all kinds of different animals live together in relative, if occasionally fractious, harmony. We’re told that thousands of years ago the predator species came to an accord with the prey species and, presumably, went vegetarian, which now allows for, say, an elk taxi driver to pick up a mountain lion businessman and not fear that he’s going to be eaten. There are, of course, problems (the whole thing is a race allegory, although no one species or group maps cleanly onto any real world ethnic group), but on the whole the system works.

Into this melting pot comes Judy Hops (Ginnifer Goodwin), who has resolved to become the first bunny police officer. Herbivore cops are nothing new – her commanding officer (Idris Elba) is a cape buffalo – but rabbits are considered a timid lot, so Hops gets lumbered with parking patrol duty. She’s determined to prove herself, though, so when she gets a chance to investigate a case involving a missing otter, she jumps at the chance, enlisting the reluctant aid of a Nick Wild (Jason Bateman), a conman fox who gave her static on her first day. It’s not long before the two mismatched partners are unraveling a conspiracy that threatens Zootopia’s very existence, and reaches from the streets right to the corridors of power.

So, it’s a buddy cop movie! And a pretty good one, too. The plot, which involves a spate of carnivore animals going “feral” and attacking other animals, is a classic noir – indeed, the whole thing is a kind of candy-coloured LA Confidential, if you can believe it. The film acknowledges its genre roots, whether by direct homage – there’s a riff on The Godfather, and another on, of all things Breaking Bad – or by allusion, such as our cop and conman duo having *ahem* 48 Hours to solve their case.

All this is set against a gift of an environment, the bustling titular metropolis itself. In an inspired move, Zootopia is divided up into different sectors that mimic varying climates – the tundra, the rain forest, etc – so we’re not limited to one “earth but with anthropomorphic animals” urban setting. The film is rich in little details, from punny magazine and product titles to bits of business explaining how animals of different sizes can co-exist – tiny rodents get their own suburb, which we see during a foot chase that, to the little guys, is like a Godzilla attack,

That richness extends to the society depicted. What’s interesting is how the film maintains that co-existence is possible but still illustrates that prejudice and stereotyping exists in the society it depicts. Hops isn’t taken seriously because she’s low down on the totem pole even for a herbivore; similarly Nick reveals he became a conman because everyone expects foxes to be sneaky, sly and greedy, so why bother trying to prove them wrong? The film kind of tries to have its cake and eat it, at some points decrying obvious stereotypes, at others reveling in them for comedy’s sake, but on the whole it works.

The whole thing works, really. Zootopia is a relentlessly fun movie and an introduction to a great setting that I hope we haven’t seen the last of.