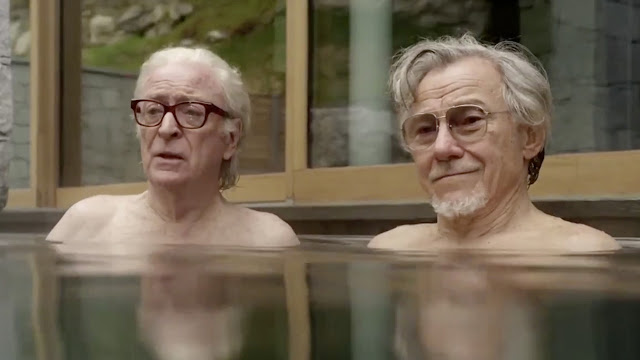 In a nutshell, Youth is about two old friends with similar but diametrically opposed problems. Filmmaker Mick (Harvey Keitel) still acts like he’s in his prime, convinced that the march of time has had no effect on his skills or his career. On the other hand Fred (Michael Caine) a retired composer, is just marking time until the reaper calls. He hasn’t composed or conducted publicly in years, and even a request from Buckingham Palace to perform at a royal function cannot stir him from his self-imposed retirement.

Paolo Sorrentino’s meditation on ageing and regret plays out at a beautiful, slightly surreal luxury resort in the Swiss Alps, populated by a mixed bag of eccentrics and artists. Rachel Weisz, who between this and The Lobster has spent a lot of time hanging around weird hotels this year, crops up as Fred’s daughter to remind him and inform us of some shadowy transgressions against his now-absent wife, and his failings as a parent. Paul Dano is a pretentious movie star, eerily reminiscent of Shia LaBeouf,who is preparing for an upcoming role. Madaline Diana Ghenea is the otherwise unnamed Miss Universe, a jaw-dropping beauty who is the living embodiment of everything our two haggard heroes have longed for and lost over the course of their lives.

The film ambles along at its own piece, a collection of vignettes that slowly coalesces into something greater and more coherent. It’s a visually sumptuous work, with Sorrentino unafraid to linger on the beauty of the alpine setting, letting us contemplate the idiosyncratic contrast of the precise angles of the resort against the rugged mountains and lush meadows.

But the jewels in the film’s firmament are Caine and Keitel. It’s pretty much accepted wisdom that Caine can do almost no wrong these days, such is the quality of his twilight career renaissance, but it’s been a while since Keitel’s given us something worth looking at, and he’s pretty great here. Mick is constantly trailed by a collection of young, pretentious screenwriters who he’s working with to try and crack a script and. They’re a horrible mob of self-absorbed millennial douchebags, but that makes Mick the elder statesman of douchebags: he may be older and wiser and crankier, but there’s not a huge difference between him and his flunkies, other than time.

Fred, on the other hand, prefers to operate in isolation, only grudgingly interacting with anyone other than Mick and his daughter. Consumed by guilt – over exactly what we only learn later – he composes music in his head and conducts disinterested cows in a mountain meadow, his work now never intended for human ears. It’s an incredibly soulful performance from Caine, who is surely bringing a lot of his own baggage to the role.

Sorrentino pretty much specialises in films about grumpy old guys who need to decide whether or not to break out of their self-created ruts – see This Must Be The Place and The Great Beauty – and Youth is no exception. Elegiac, composed, funny and sad, it’ll have you contemplating your own mortality in the nicest possible way.