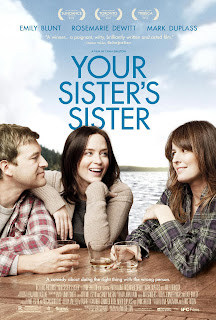 Sibling Ribaldry
Directed by Lynn Shelton
Starring Mark Duplass, Emily Blunt, Rosemarie DeWitt
Mumblecore auteur Lynn Shelton follows up the provocative Humpday with this charming, funny look at the complexities of family, relationships, and family relationships.
When it becomes clear that Jack (Mark Duplass) is not coping well with the recent death of his brother, his best friend, Iris (Emily Blunt) – who also happens to be the ex-girlfriend of the deceased sibling in question – tells him to take some time out at her father’s remote cabin and think things through. On arriving at the cabin, though, Jack discovers that Iris’s sister, Hannah (Rosemarie DeWitt) is there too, and for much the same reasons, having just broken up with her long term girlfriend. A drunken bull session leads to an impulsive sexual encounter, the fallout from which is further complicated by the arrival of Iris, whom Jack has feelings for.
Shelton makes the most of her limited budgetary assets here, putting a small number of locations and a handful of performers to excellent use. On reflection, the film is little more than a series of dialogue scenes, but that dialogue is so rich, funny, trenchant and natural. This isn’t a film that’s in a hurry to get where it’s going, and that’s for the best – it’s greatest strength is its well-drawn characters, and it’s a pleasure just to hang out with these people for a while as their interactions reveal their relationships, agendas, and individual peccadilloes.
Duplass continues his quiet climb to the top of the comedy pile with a winning, warmly self-deprecating performance, managing to imbue Jack with both humour and pathos. Emily Blunt, who has been ubiquitous to the point of annoyance over the past couple of years, really lifts her game here – Iris could have been a twee character, the typical indie flick manic pixie dream girl, but Blunt’s insightful interpretation of the nuanced script steers well clear of that potential train wreck. Meanwhile, DeWitt shines in what could have been a difficult role; Hannah is arch and defensive almost to the point of being antisocial, and the way in which DeWitt carefully and gradually allows the character’s guard to drop and her personal revelations to gradually flow is an astute “less is more” performance.
Your Sister’s Sister could have been a navel-gazing exercise in solipsism and maudlin relationship politics. It also could have been a twee, faux-hip rom-com. The fact that it is neither is a kind of quiet miracle. It’s beautiful without being polished, insightful without being overly introspective, sexy without being crass, and funny without resorting to broad strokes and overblown histrionics. It’s almost the Platonic ideal of a smart, indie, relationship comedy. It’s not often that we see films that actually reflect some of the complicated messiness of actual human relationships. All other considerations aside, that’s a good enough reason to check this one out.

Additionally, the good folks at The (Pod) Casting Couch were kind enough to have me sit in with them yet again. This time we discussed Your Sister’s Sister, and I revealed my deep and abiding love for the John Hughes classic Pretty in Pink. You can listen to it here.