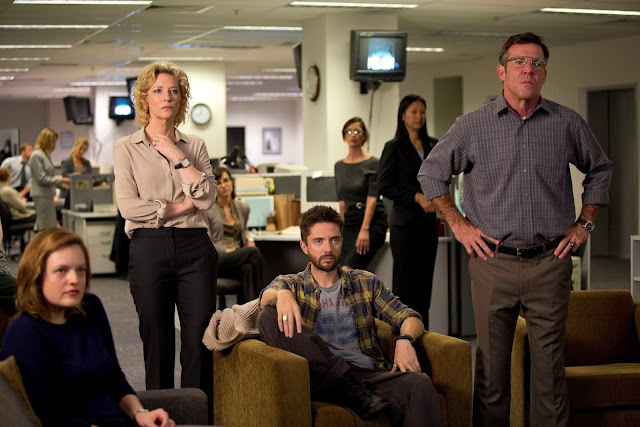 How much you enjoy Truth is going to very much depend on where you sit politically, I feel. Making his directorial debut, noted screenwriter James Vanderbilt doesn’t so much examine the 2004 Killian Documents scandal as give his own take on it – and it’s a take that greatly departs from the accepted version of events.

Not long before the 2004 American presidential election, photocopied documents surfaced purporting to be evidence of George W. Bush having received preferential treatment during his time in the Texas Air National Guard – specifically, he was shielded from being sent to Vietnam and was tacitly allowed to go AWOL to further his political career by working on a Republican election campaign. 60 Minutes producer Mary Mapes, here played by Cate Blanchett, ran with the story, with senior anchor Dan Rather (Robert Redford) on point, and a team of seasoned journalists and investigators doing diligence. Long story short, CBS was forced to issue a retraction when the provenance of the documents proved dubious, and a goodly number of employees lost their jobs – including Rather and Mapes.

Truth takes the position that the documents were real – or at least not provably false – and builds a tight, ambitious, moralistic but ultimately shaky story of journalistic integrity up against corporate power (at one point it makes the case via Topher Grace’s new media rabble-rouser that CBS’s parent company, Viacom, had a vested interest in seeing Bush back in the White House – which might be true, but comes across as a bit of a desperate screed). This wants to be All The President’s Men or The Insider; instead it’s more in line with JFK – a counter-myth rather than a blown whistle.

It is handsome and convincing, though. That is certainly a great cast doing great work, if nothing else. The relationships convince; Rather is a surrogate father to not only Mapes, but to the fiery Mike Smith (Grace), who views him as a living legend. Smith butts heads with former Marine Colonel Roger Charles (Dennis Quaid, and isn’t it great to see him again?) but their commitment to their jobs overrides their political differences.

The dialogue is sharp, the performances committed the rising tone of righteous indignation is on point. Sadly, by reducing a complex series of circumstances into a simple good vs evil polemic, Vanderbilt has undermined his own lofty goals, politically and creatively. Absolutely worth a look, but also worth a considerable pinch of salt.