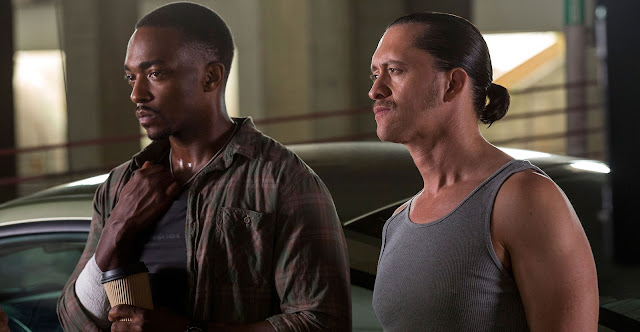 The obvious touchstones for this ill-conceived crime thriller are Heat and Training Day, but in its soul what Triple 9 really feels like is a bad Sin City story – like, what if Frank Miller wrote one now, with all his weird hang ups and obsessions in full flight and us all knowing that what was previously read as satire or homage is actually meant to be taken seriously.

The film opens with a bank robbery – there’s that Heat – that is subsequently revealed to have been committed by a mixed bag of criminals – Chiwetel Ejiofor, Norman Reedus, Aaron Paul – and corrupt cops – Antony Mackie and Clifton Collins. Jr. The theft was undertaken at the behest of the Russian mob, in the person of the icy Irina Vlaslov (Kate Winslet), who is blackmailing the team to perform high risk jobs as part of a scheme to spring her husband from some horrible gulag.

The specifics of the plan aren’t clear, but we do get a handle on the leverage she has on one of the robbers, Michael Atwood (Ejiofor): he was married to Irina’s sister, Elena (Gal Gadot) and the two of them are withholding access to his young son. One more job and Michael will get to see him again, but this final mission is sure to bring down too much heat, so the team plan to stage a “triple 9” – murdering a police officer in  different location in order to send the cops hurrying there while they undertake the robbery. In an (un)happy coincidence, Marcus (Mackie) has a new partner, Chris Allen (Casey Affleck) who is just ripe for taking a fall.

That’s a lot of plot to distill into a couple of paragraphs, and that’s really jut the bare bones – we also have Woody Harrelson thrown into the mix as Chris’ uncle, a drugged-out senior detective investigating the robberies, and the added complication of Aaron Paul’s junkie fuck up threatening to bring the whole mess down after Irina kills his brother (Reedus) for… no good reason actually – she just does it to be evil more than anything else. Triple 9 is a convoluted mess, and while it clearly thinks its depicting a complex world where the difference between cop and criminal is negligible, it comes across as lacking in insight. There’s no point here, no thesis being tested.

It also lacks a protagonist. Hazarding a guess, Affleck’s rookie is probably meant to be our point of view character, but he’s lacking in agency; things happen around him and out of his sight for most of the movie, and even when he gets a clue as to what’s going on, it’s so late in the day that his actions – reactions, really – don’t matter. More interesting is Ejiofor’s ex-military armed robber, although we get scant details on him: was he a criminal beforehand, or was he forced to become one by Irina? What are the relationships between him and the other members of his team? How do these guys know each other well enough to go taking down scores together? We don’t need a full backstory, but we need something. The robbery crew feel like a first level D&D party: they all met in a bar and a Russian mob wizard gave them a quest. And the DM let Clifton Collins, Jr. play an Anti-Paladin for some reason.

There’s also a weird streak of misogyny through the film. Winslet’s Irina isn’t a character, she’s a caricature, an icy villainess who’s introduced nodding approvingly at a sandwich bag full of teeth extracted from a couple of doomed transgressors, and never gets more characterisation than that. Christ knows what Gal Gadot is doing here – she barely gets a line of dialogue and is basically tasked with flouncing around in tight clothes that may as well have “Negligent Mother” stenciled across the front. Australian actor Teresa Palmer, who crops up as Affleck’s wife. gets even less consideration.

Director John Hillcoat – who is capable of much, much better – milks the Atlanta setting for atmosphere, giving everything a light sheen of sweat and swampy decay. He can shoot the hell out of an action sequence, too. When the film hits violence, the results are impressive, but also silly: at one point the robbery crew blow a guy’s foot off with an improvised explosive for no tactical reason – it’s just bloody and mean and it looks cool, which is the whole film in microcosm, I guess.

Triple 9 feels like it was written by a 16 year old who has just discovered James Ellroy. If you’re a fan of sleazy, nihilistic crime melodrama – and I am – you will find some stuff to enjoy here, but you’ll need patience to wade through the pap. There are much better movies in a similar vein, and the best Triple Nine manages to do is remind you of them.