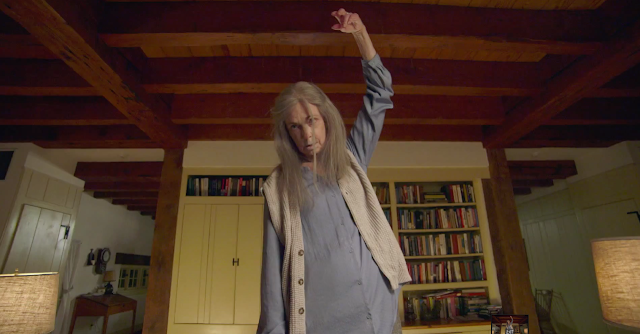 Directed by M. Night Shyamalan
Starring Olivia DeJonge, Ed Oxenbould, Kathryn Hahn
Love him or hate him, M. Night Shyamalan is most certainly an auteur. His films are an expression of his vision, from the moody atmospherics to the trademark twist in the tale. Being involved at almost every step in the process, as writer/director/producer* certainly means that those are his dreams up on the screen. Of late that has also meant he has been the one to blame, with his projects over the last few years being at best disappointing, The Visit sees him returning to his simple horror roots, in what appears to be an attempt to re-center himself.
When their mother (Kathryn Hahn) goes on a vacation with her new boyfriend, Becca (Olivia DeJonge) and Tyler (Ed Oxenbould) decide to use the opportunity to catch up with their estranged grandparents and stay at their farm for a few days. Having never met them before, Becca seeks to record this first meeting on camera,  taking the opportunity to discover what caused the decades-long schism in the family. However, all is not as it seems and things get strange when they hear something (or someone) scratching on their door at night.
It’s great to see an upward trajectory here. M. Night sets himself modest ambitions and achieves them, creating a solid horror film. When the twist is revealed it rises organically from the situation and makes perfect sense within the world created. It also, as is typical for a Shyamalan movie, skews the audience’s view of the world and makes us reconsider all that has gone before. It is that feeling of the ledge dropping out from under your feet, that really cranks up the tension, and can be a uniquely rewarding experience.
M. Night uses the horror elements to good effect, building that tension slowly but keeping it constant. It’s more of an atmospheric piece than a gorefest, but Shyamalan manages to bring enough scares to the screen without having to rely on cheap jump frights to provoke the audience. There are some genuinely creepy moments of body horror here, especially involving Deanna Dunagan, who plays the children’s grandmother. Without giving too much away, you can see Shyamalan’s cinematic influences, and the director’s cut of The Exorcist is certainly amongst them. The end result is a number of moments that leave your skin crawling – exactly what you want in this sort of outing.
What is surprising is the amount of humour in The Visit. It acts as a relief valve to the slow build tension the audience is subjected to. Although not the first time humorous elements appear in M. Night’s work, this might be the first time that they successfully land. His previous attempts have either been accidental (The Happening), or set a strange counterpoint to the tone of the film (Signs). Here it seems well balanced, generally arising from the interplay of the siblings, or taking the audience off guard after a tense scene. Certainly unexpected, it adds a touch of freshness to the director’s usual formula.
The majority of the humour really comes down to the young central cast. DeJonge and Oxenbould form a classic sibling combination of opposites. DeJonge is the over-intellectual elder sibling, lacking in confidence, while Oxenbould is a precocious rapper (complete with over-inflated opinion of how “hard” a 13 middle class kid from the suburbs is). Play these two off against each other, especially in a high tension environment of a horror plot, and pretty good horror comedy ensues. Add Deanna Dunagan and Peter McRobbie as the eccentric grandparents, and you are set.
Using the found footage genre is less of a stretch for Shyamalan. He doesn’t view himself as slavishly locked into the format as previous iterations have been, more loosely using it as something to hang his ideas upon. In the strictest sense The Visitobeys the rules of the genre –  it just allows for editing, daily title cards (very reminiscent of The Shining), and fixed point cameras on tripods, rather than constant shaky cam. The end result is often a compromise rather than a legitimate attempt to mimic found footage. It has the usual visual flare of M. Night, with the framing occasionally being off to represent a 15 year old filming it rather than an experienced crew. It works well enough and is infinitely preferable to motion sickness, a five minute view of sneakers running away, or the compulsory “low battery warning” graphic at a key moment.
There are other themes to discuss here (such as the portrayal of ageing, mental health, and dealing with loss), but such an exploration would involve drilling down into the text, and spoiling a lot of the plot. Honestly, as this uses the element of surprise so strongly, that is a conversation for another time. Suffice to say, for the first time in years there is a M. Night Shyamalan film that is worth watching for more than just morbid curiosity. A definite return to form, The Visit is a solid horror film rather than a classic, but sometimes that is exactly what you are in the mood for.
DAVID O’CONNELL
*The Last Airbender and After Earth notwithstanding – TJ