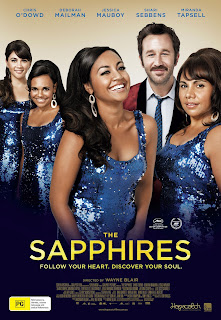 Soul Sisters
Directed by Wayne Blair
Starring Deborah Mailman, Chris O’Dowd, Jessica Mauboy, Miranda Tapsell, Shari Sebbens
The dominant myth about Australian cinema is that everything we produce these days is either a relentlessly depressing social drama or an unwatchably quirky comedy. Frankly, it’s not without justification. But, every so often, we knock it out of a park with a big, fun, heart-warming, four-quadrant picture that puts a smile on the face of all but the dourest of film-goers. We made The Adventures of Priscilla, Queen of the Desert. We made The Castle. We made Red Dog. And now, we’ve made The Sapphires.
Adapted from the 2005 stage play written by Tony Briggs, and in turn based on a true story, the film tells the adventures of four aboriginal girls – the prickly, protective Gail (Deborah Mailmain), the talented ingénue Julie (Jessica Mauboy), the outgoing Cynthia (Miranda Tapsell), and the conflicted Kay (Shari Sebbens) – as they travel to Saigon to entertain American troops as a musical act. Initially a country and western group, they switch genres to soul at the insistence of Dave (Chris O’Dowd), a drunken Irish DJ who becomes their manager.
It’s pretty much impossible to overstate how enjoyable The Sapphiresis, with its mix of music, comedy, and heartfelt emotion. It’s lovable almost to the point of gormlessness, but it’s such an open and sincere work that it’s lack of subtlety and complexity actually becomes a merit.
A cursory examination of the marketing material might lead the casual observer to think that Jessica Mauboy is the lead here, but the film belongs to Deborah Mailman, who gives a committed, honest performance as a woman whose drive to protect and nurture her siblings has rendered her obtuse and emotionally unavailable, and it’s her journey that is heart of the story. Meanwhile, O’Dowd, perhaps unsurprisingly, provides the bulk of the laughs with a performance which, while not far different from most of the roles he’s tackled, plays to his strengths.
It’s not a flawless film, though; some of the supporting performances are stilted, and some of the dialogue is on the nose. Worse, a major characters back-story is delivered in an infodump speech that renders what should be a deeply affecting revelation almost laughable. Nonetheless, these problems are eminently forgivable; what The Sapphires does well, it does so well as to make any minor complaints about the film largely moot. Its eagerness to please is palpable, and it’d take a cruel critical mind to cut the legs out from under it as it dances for our entertainment.
Industry pundits are already predicting that The Sapphires will make an obscene amount of money, and they’re not far wrong – it’s exactly the sort of film that appeals to the broadest possible audience, and few who see it will come away unsatisfied. It’ll sweep the local awards, it’ll play for months, and the soundtrack will be all but unavoidable on commercial radio. But this is a case where the masses are right for a change, and you could do much worse than slapping down the price of a ticket – The Sapphires is a winner.